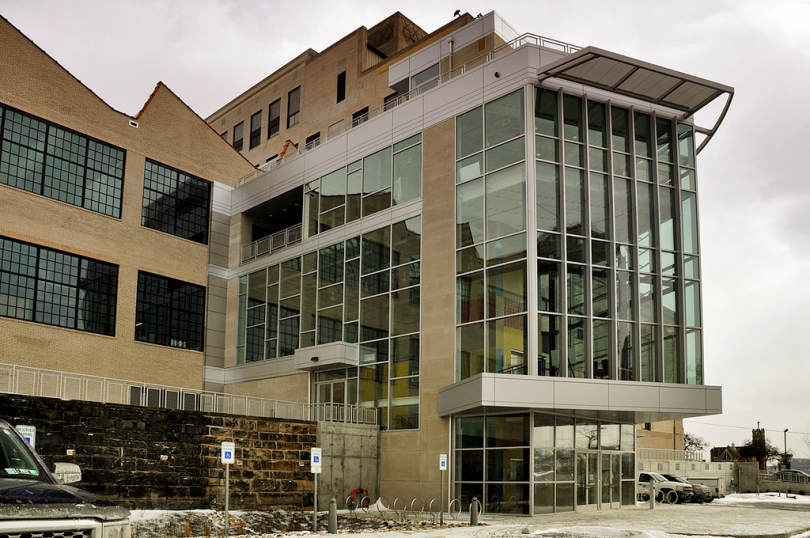 PITTSBURGH — A remarkable example of building reuse and historic restoration, a Pittsburgh state-of-the-art green building has successfully met the goal of achieving a high level LEED Platinum certification. The 200,000 square-foot Energy Innovation Center (EIC), which hosts trade apprenticeship programs, energy-related technology labs for five universities, co-working facilities, and other production, design, and workspaces for nonprofit organizations and businesses, was opened in 2015 in the former Connelley Trade School Building.  For years, the design team worked diligently to preserve many of the original aspects of the building while advancing the goal of creating one of the most efficient green buildings in the region.

“This LEED Platinum certification is proof that in repurposing the Connelley Trade School as a center for energy innovation we didn’t just talk the talk- we walked the walk,” noted Congressman Doyle, who was actively involved in the project from its inception. “Not only is the EIC a place where technologies are developed and people are trained for careers in the energy sector; it’s also an example of cutting edge energy-efficiency and sustainability.”

“This project, capped off by its LEED Platinum certification, is an example of what can be done when we all work together,” said County Executive Rich Fitzgerald. “The preservation of this building, its reimagining and its place as a center for innovation in our community has all come about because of unique partnerships. Today’s announcement is just one more accolade and recognition to those who made this possible that their work and collaboration was successful. I congratulate all those involved on this significant accomplishment.”

The LEED Platinum certification is an important validation of the support that the project received from its funders, and the commitment by Pittsburgh Gateways Corporation and the design and construction team to transform the previously shuttered national historic landmark into a shining example of Pittsburgh’s growing clean energy economy.

Dr. Aurora Sharrard of Green Building Alliance remarked: “Delivering on a decade-old vision, we’re excited to have the Energy Innovation Center become the eleventh non-residential LEED Platinum project in Western Pennsylvania — and only the fifth to renovate an existing building. LEED continues to create a high bar of achievement for green building projects — with Platinum being the top designation.”

Bill Miller, COO & Vice President of Pittsburgh Gateways Corporation which founded the EIC, said:  “Achieving LEED Platinum certification for an adaptive reuse of a historic building of this size is an international recognition of our efforts to reduce energy usage and provide an environmentally friendly and productive work environment. This accomplishment also dovetails nicely into our ongoing effort to provide a training platform for designing, building and operating energy efficient buildings.”

Some of the energy features that contribute to the certification include:

Additional environmental factors that make the project an exemplary green building include:

“We are excited that this project does so many things well. This is a sensitive reuse of a historic building that has been brought into the 21st century by a socially meaningful organization,” says Marc Mondor, AIA, Principal of evolveEA, who acted as sustainability consultant on the project. “Water efficiency, site hydrology, materials reuse, copious daylighting, amazing views and advanced energy efficiency strategies all work together to create a pleasant and efficient building that has already become a regional institution.”

For inquiries about tours, leasing, or shared workspace opportunities at the Energy Innovation Center please contact 412-802-0988 or info@eicpittsburgh.org