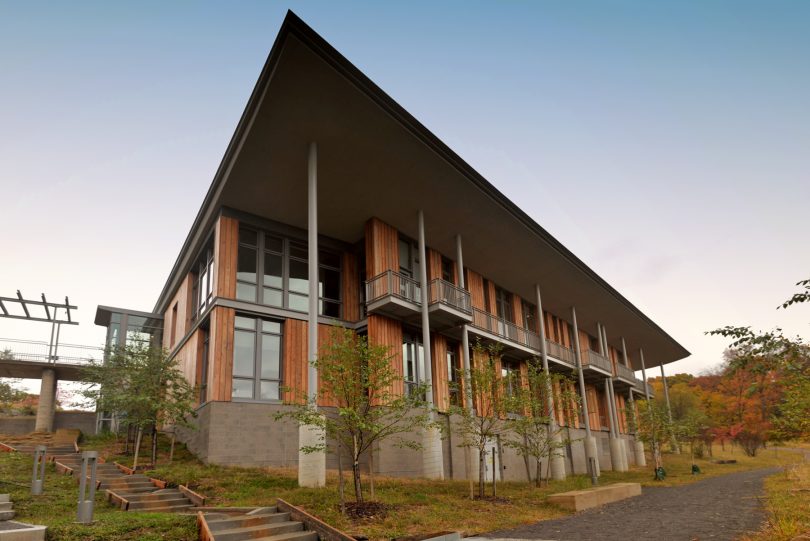 Frick Environmental Center is first municipal building free and open to the public to be certified in the country; one of only 21 buildings worldwide

After more than a year of extensive sustainability work the shared project between the Pittsburgh Parks Conservancy and the City of Pittsburgh, received the Living Building Challenge (LBC) Certification, the world’s most rigorous proven performance standard by the International Living Future Institute.  The Frick Environmental Center is the first Living Building in the U.S. that is municipally owned and free and open to the public.  To qualify, the Frick Environmental Center must produce as much energy as it consumes annually, eliminate toxic and harmful chemicals, and collect and treat its own water.

“What a great accomplishment for the Pittsburgh Parks Conservancy and the City, said Pittsburgh Mayor William Peduto. “Together, we are continuing our leadership in green building standards and environmental education for all.”

Pittsburgh Parks Conservancy President and CEO Jayne Miller says, “We are proud to have one of the greenest buildings in the world that also functions as a tremendous resource for our community. It is truly a regional treasure.”

“No building in western Pennsylvania has ever been built according to such rigorous performance standards,” said PJ Dick Project Manager Noah Shaltes. “By the project’s end, we had impressed the importance of sustainable building on more than 100 members of the building and construction industry. The team’s commitment to vetting materials was key to successful certification.”

This week Pittsburgh Parks Conservancy’s Sustainability Coordinator Maureen Olinzock will travel to Portland, Ore., to receive the official Living Building certification at the Living Future Unconference. This is yet another accolade for the Frick Environmental Center, which has garnered almost a dozen awards.

About the Pittsburgh Parks Conservancy:

Founded in 1965, Bohlin Cywinski Jackson is noted for elegant and humane design, ranging from modest houses to large academic, civic, cultural, and corporate buildings. To date, the firm has received more than 675 design awards, including three AIA Top Ten Green Project Awards and the AIA Architecture Firm Award. In addition, the firm has designed academic buildings for Carnegie Mellon University, the University of Pennsylvania, and Yale; cultural gathering spaces such as the award-winning High Meadow Residences and Studio at Fallingwater, and Liberty Bell Pavilion; and city halls in Seattle and Newport Beach, Calif.

PJ Dick has managed more than $9 billion in construction activity in the Mid-Atlantic region and is consistently ranked one of the Top 100 Builders in the nation by Engineering News Record Magazine. For over three decades, they have provided comprehensive construction services in the areas of general contracting, design-build, construction management, preconstruction, and project management. Having constructed more than 50+ LEED projects, PJ Dick has built more USGBC Certified LEED buildings in the region than any other local contractor.

LaQuatra Bonci Associates is a landscape architecture, urban design, and land planning firm based in Pittsburgh, Pennsylvania.  We believe in the art of the designed landscape as a powerful and transformative tool to restore and enhance ecology, promote community well-being, and add economic vitality.  Drawing on the rich legacy of our profession, we are committed to understanding historic precedents, public constituents, and site intricacies to develop unique and contextual design solutions.  It is our passion to create innovative, elegant and timeless landscapes.

About the International Living Future Institute

The International Living Future Institute (ILFI) is a nonprofit working to build an ecologically-minded, restorative world for all people. Using principles of social and environmental justice, ILFI seeks to counter climate change by pushing for an urban environment free of fossil fuels. ILFI runs the Living Building Challenge, which is the world’s most aspirational green building standard, and several other programs: the Living Product Challenge, the Living Community Challenge, and the Reveal, Declare and Just labels. These programs develop a green framework for living in a 21st-century world.

About the Living Building Challenge