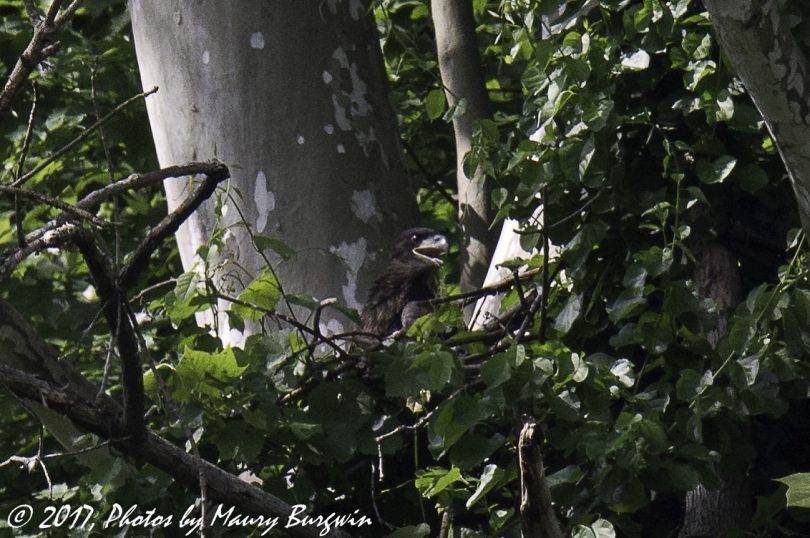 At the peak of its industrial might, Pittsburgh’s air, rivers and riverfronts bore the brunt of toxic fallout from factories and mills.  Riverfront hillsides were largely denuded of plant life, and few if any fish managed to survive in the city’s waterways.

Cleanup efforts implemented during the Pittsburgh’s post-World War II ‘Renaissance’ initiatives, together with passage of the Clean Air and Clean Water Acts led to a gradual recovery of the city’s three rivers:  the Allegheny, the Monongahela and the Ohio. Today, these rivers and other local waterways support a variety of fish life, a change that has gradually triggered the return of large fish-eating birds of prey and waterfowl to the region.

In 2013, what was thought to be the first Bald Eagle hatched in Pittsburgh in some 200 years was observed in a nest located in Hays Woods, a 660-acre tract of undeveloped urban woodlands along the Monongahela. The eagle pair and its offspring, together with subsequent hatchings in the last four years, have attracted a devoted following of locals as well as people around the world who follow the eagle family via a web cam hosted by the Audubon Society of Western Pennsylvania. Since then, at least three additional pairs of eagles have settled in the Pittsburgh area, establishing nests along the Allegheny River at Harmar, the Ohio River in Crescent Township, and the Youghiogheny River at Coulter. Observers are also hopeful that a pair seen near Marshall Lake in North Park may be the next nesting pair for our region.

Osprey, great blue heron, and the common merganser duck – all top-level piscivore (fish-eating) birds – have also moved into the region in the past 10 years or so.   Great blue herons, a colonial nesting bird, have formed a large rookery in a stand of sycamore trees just southwest of Pittsburgh in Scott Township and can now be spotted in suburban areas around the city. Unlike the eagles and herons, however, osprey and mergansers are utilizing built structures for their nesting, including area bridges and electrical towers.

“Having all four of these apex predator species here is a sign that all of the biological links  below them in the food chain necessary to support healthy fish life are now in place; our forested hillsides have matured to the point that large raptors such as eagles see them as desirable for nesting,” says National Aviary ornithologist Robert Mulvihill.  “The fact that we are starting to see osprey, which are strictly piscivorous — meaning 100 percent reliant on fish for food — is particularly telling.  It takes many steps to achieve this kind of environmental recovery, and it is a remarkable representation of how far Pittsburgh has come.”

Additionally, Pittsburgh is now annually attracting a large number and diversity of wintering gulls and migrating waterfowl and shorebirds, another sign of the region’s ongoing ecological improvement.