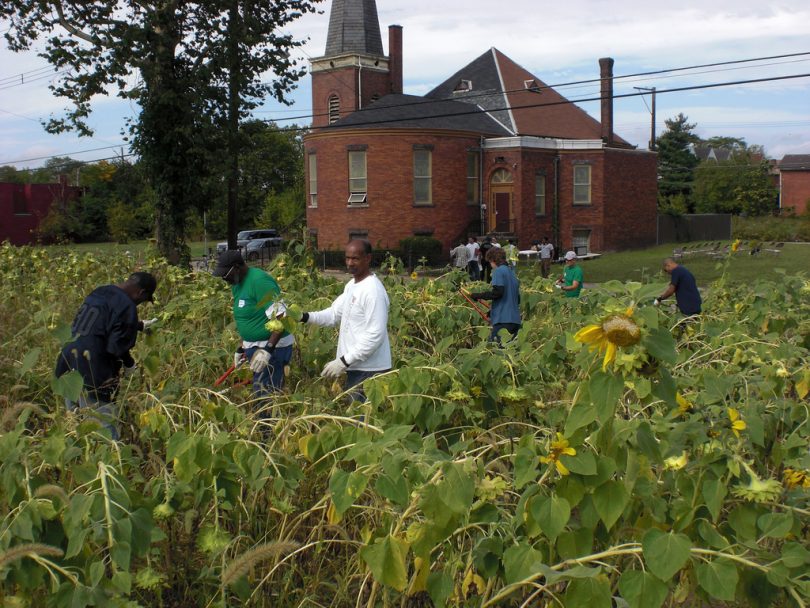 The Pittsburgh neighborhood of Larimer is a model for community-driven revitalization.

Over the years, due to blight and lack of funding, Larimer’s population dropped to just 1,800 people. But the community never stopped organizing.

In 2014, the U.S. Department of Housing and Urban Development awarded Larimer a Choice Neighborhoods grant–$30 million to develop 350 units of mixed-income housing and mixed-use development. The first phase of development–85 units with 53 designated as affordable–was completed in October 2016. An additional 40 new multi-family rental units are being built around the neighborhood. City funds have also been earmarked for Larimer, with $12 million coming from the Pittsburgh City Council with $16.5 million from the Housing Authority, both over the course of five years.

But it is the environmental component of the community-driven organizing that sets Larimer apart.

The new housing development is going to be ‘green’– and Pittsburgh Mayor Bill Peduto has called it “the greenest housing development to be built in the United States.” The buildings will all be high energy efficiency with ample green space incorporated throughout the complex.

But it’s not just this new housing development that’s green. Larimer saw its first new housing construction in decades in 2015, where 40 mixed-income units were built to the joy of the community. The community demanded to be involved and implemented their own green-action plan for the site. The developer, KBK Enterprises, complied by building green stormwater infrastructure around the buildings.

The Larimer Consensus Group, the Kinglsey Assocation, and the Green Team are some of the most vocal green advocates for Larimer and helped push the above green infrastructure into place. But they are also working together to implement the Larimer Vision to Action Plan. The Larimer Consensus Group believes that “community planning and development is most successful when members of the larger community are aware, engaged and included in the decision making process,” and the Vision to Action Plan seeks to do just that, with focus on housing, transportation, and ‘greening’ the community.

Additionally, The Living Waters of Larimer is helping to build community-capacity for long term rainwater management. The project examines four areas of different sizes in Larimer for potential storm-water redevelopment, and will define best “practices for urban placemaking with high performing rainwater systems in different scales of development.” Larimer is one of the first communities to do this type of community-centric redevelopment, and will use its results as a model for the nation.

The Pittsburgh Green Jobs Now event held by GTECH Strategies in the Larimer Community of Pittsburgh. GTECH reclaims vacant land by growing bioenergy cross such as sunflowers to clean the soil, beautify neighborhoods and create a platform for green collar job training.