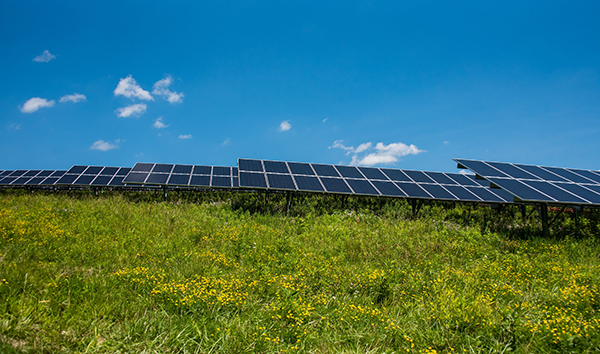 Pittsburgh International Airport (PIT) is the first airport in the world to be completely powered by natural gas and solar energy as part of its microgrid.

The first-of-its kind microgrid, completed in 2021, increases resilience, maximizes public safety and makes PIT one of the most site-hardened airports in the world. The microgrid is part of a larger sustainability effort by the airport that includes employing alternative fuel strategies, repopulating the honeybee population and striving for LEED Silver Certification in its terminal modernization program.

The power generated at PIT is the primary supply for the entire airport, including the terminals, airfield, Hyatt hotel and Sunoco. The airport remains connected to the traditional electrical grid as an option for emergency or backup power if needed. The microgrid generates power, in part, through onsite natural gas wells and 9,360 solar panels across eight acres.

The Allegheny County Airport Authority in 2019 awarded Peoples Natural Gas a 20-year contract to build, maintain and operate the microgrid at no cost to the airport. In addition to boosting power resiliency and redundancy, the microgrid achieved $1 million in energy savings on electricity costs in its first year and cut carbon dioxide emissions by about 8.2 million pounds.

The microgrid at PIT is powered by natural gas drilled on-site by CNX Resources, in addition to gas from the interstate pipeline system and solar generation. The project offers a more efficient, sustainable and resilient source of energy and consists of five natural gas-fueled generators and nearly 10,000 solar panels, capable of producing more than 20 megawatts of electricity, the equivalent of powering more than 13,000 residential homes.