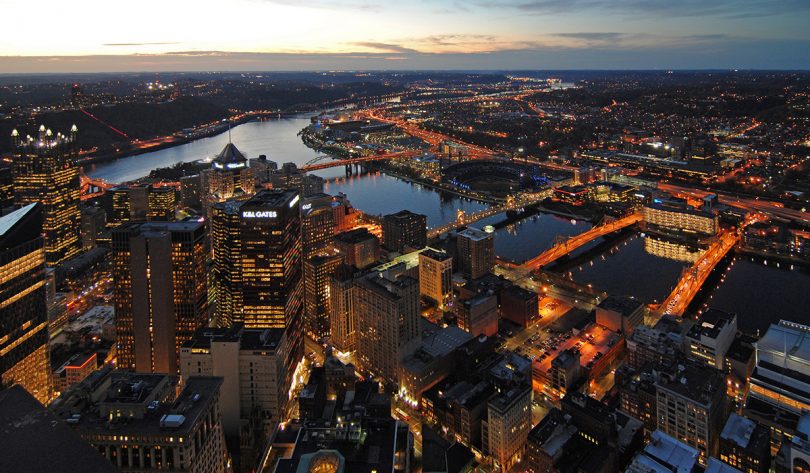 Pittsburgh Water and Sewer Authority (PWSA) and evolveEA received an Architectural Excellence Award from American Institute of Architects (AIA) Pennsylvania. The Citywide Sewershed Evaluation study was recognized for its integration of green infrastructure (GI) into Pittsburgh’s neighborhoods that are most prone to flooding and in need of stormwater management. The evaluation is part of PWSA’s and the City of Pittsburgh’s Green First Plan, which was publicly released last year.

evolveEA is a sustainable architecture and consulting firm based in East Liberty and a partner with PWSA on the Citywide Green First Plan. The project team for the Green First Plan also included Arcadis, Fourth Economy Consulting, Mott Macdonald, and Phronesis.

“Receiving this award is an honor for evolveEA, the City of Pittsburgh, and the Pittsburgh Water and Sewer Authority,” stated Robert Weimar, PWSA’s Interim Executive Director. “PWSA has several green infrastructure projects under construction and eventually, as more of these projects are built, they will create a network throughout the city to manage stormwater. This study helped us identify priority areas and which projects to initiate first.”

“We will be better able to keep our rivers clean by thinking of rainwater as an asset and integrating it into our parks, streets, and open spaces. Green Infrastructure can make our neighborhoods more livable and is a key part of a sewershed-based solution to limit river pollution, reduce localized flooding, and prevent basement backups,” said Christine Mondor (AIA, LEED AP), evolveEA’s principal.

“The Citywide Green First Plan is our roadmap to not only better stormwater management, but also improved neighborhood development,” stated James Stitt, PWSA’s Sustainability Manager. “It is a comprehensive strategy to address the root cause of multiple stormwater issues that generates collaboration among city agencies and encourages participation from both public and private development. We have already begun to apply the green first approach in Polish Hill, Garfield, Banksville, and Oakland among other locations across the city and have half a dozen more projects scheduled for next year. We want stormwater to be among the first considerations when any planning project is launched.”

The AIA Pennsylvania’s 2017 Architectural Excellence Award is an annual statewide competition. There were over 150 entries submitted by architectural firms, urban planning and design firms, individuals, and government agencies throughout Pennsylvania. A panel of jurors selected the 2017 award recipients. The Citywide Sewershed Evaluation study was recognized for excellence in the Urban and Regional Design category and was one of more than 30 recipients to receive the Architectural Excellence Award.

“I want to thank AIA Pennsylvania for recognizing the City’s deep commitment to building out its green infrastructure in conjunction with PWSA. City neighborhoods prone to stormwater problems – which in turn can lead to economic and family struggles — are going to benefit greatly as we look to keep implementing our Green First Plan,” Mayor William Peduto said.