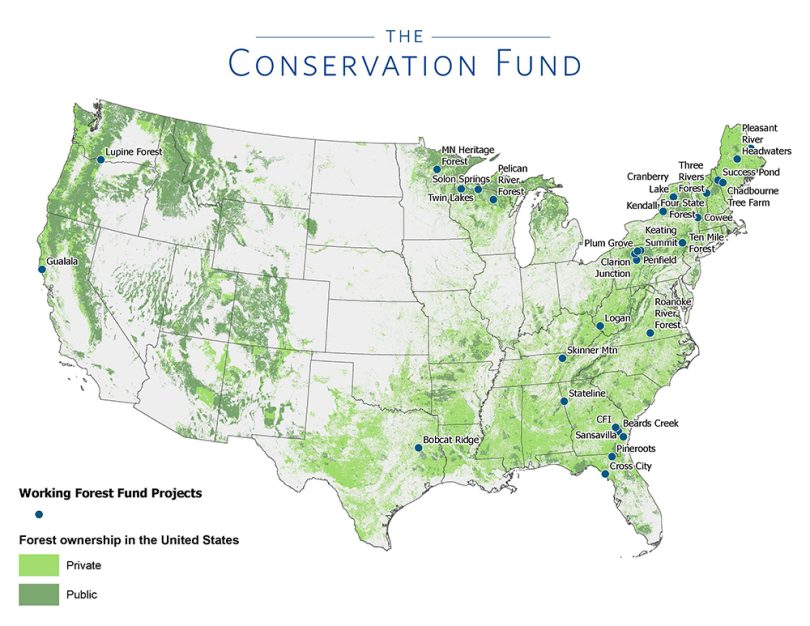 As part of its national conservation program, the Richard King Mellon Foundation (the Foundation) worked with The Conservation Fund (TCF) to pioneer a unique model that conserves working forest land across the nation.

TCF’s Working Forest Fund allows them to acquire at-risk privately held forests, put a conservation easement in place, and then hold these forests on their balance sheet until a permanent conservation outcome is found. Once the working forest is acquired by one or more public agencies, best practices of sustainable forestry are locked-in and the land cannot be developed.

What is a working forest? It refers to forestland that is managed sustainably, allowing the harvest of wood for local industries, while ensuring the forest grows more each year than is logged, protecting all of nature’s benefits.

The program provides a nature-based solution to sequester carbon, while protecting critical habitat and supporting jobs. To date, TCF has deployed $596 million in capital, including more than $235 million in Program Related Investments (loans) and grants from the Foundation, on 29 projects to impact 741,000 acres of forestland in 18 states. These lands store an estimated 178 million metric tons of CO2e, sustain 5,800 jobs, and provide $676 million in economic impact.

The Foundation supported the program initially through grants, but as the economic model began to prove itself, the Foundation began providing program related investments or loans to help with bridge financing. As the dollars return to the Foundation, they are redeployed for additional conservation efforts. The early demonstrated success of the Working Forest Fund allowed TCF to partner with for-profit partners, specifically Goldman Sachs, to create a $150 million green bond to accelerate forestland and habitat protection across the United States.