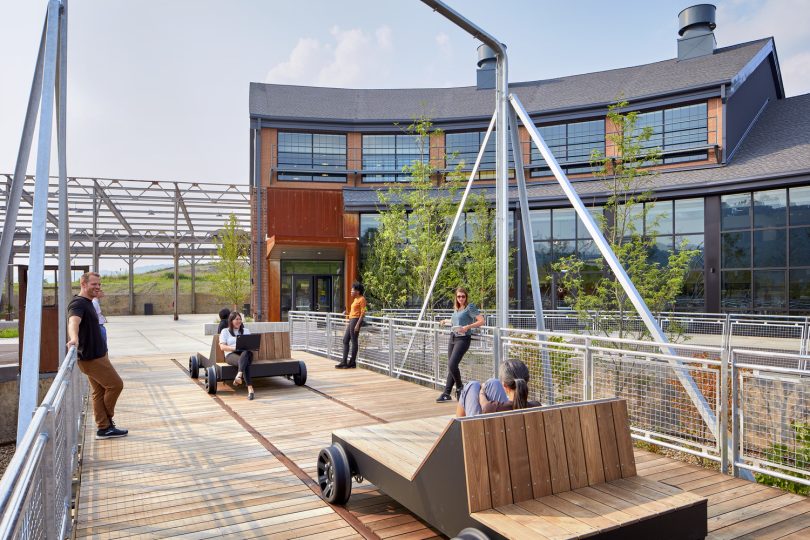 $13.7 million transformation respects the building’s historic past while repurposing the space for contemporary use

With completion of a transformative $13.7 million renovation, the Roundhouse at Hazelwood Green is now the newest innovation hub of OneValley, a Silicon Valley-based global entrepreneurship platform that supports entrepreneurs, accelerates startups, and empowers organizations across the world that foster innovation communities. OneValley at the Roundhouse brings together co-working space and a host of services, support, and networking opportunities that, together, will power and benefit Pittsburgh’s innovation ecosystem.

Originally built by the Monongahela Connecting Railroad circa 1887 and formerly owned by Jones & Laughlin Steel and later LTV Steel Company, the 10-bay Roundhouse and turntable was used to stabilize train engines for servicing and to redirect the materials they carried through the processes of production and on to final distribution.  Unique features of the space include the original turntable surface, rebuilt to function as an outdoor relaxation space with wheeled seating built on the rails, and the original bridge crane, which was rehung in the space.  Overhead engine bay doors were removed and replaced with a glass curtain wall system that brings daylight into the space and allow for open views of the outdoors.

The renovation, made possible through a combined investment by the Richard King Mellon Foundation and the Heinz Endowments,  has transformed the former industrial structure into a home for the region’s and world’s next generation of entrepreneurs.

“In the 19th century, the Roundhouse serviced the locomotives that powered the innovation economy of that era. Now, the Roundhouse is an engine once again, for a new economy, and a new generation of Pittsburgh innovators and entrepreneurs,” said Sam Reiman, director of the Richard King Mellon Foundation. “And we are fortunate to have an expert partner at the Roundhouse to serve our innovators and entrepreneurs. OneValley could have gone anywhere in the world to open their next global office. It is a statement about Pittsburgh, and a validation of our vision for the Roundhouse, that they chose to come here.”

The Roundhouse project is a milestone in the development of Hazelwood Green, which over the last 19 years has seen an investment of more than $100 million by the Richard King Mellon Foundation, Claude Worthington Benedum Foundation, and Heinz Endowments to remediate and prepare the former brownfield for sustainable and equitable development.

The Roundhouse comprises 26,000 gross square-feet and incorporates original elements such as the turntable and operator cab, bridge crane, fume hood room and track rails. Open exterior space for community use accommodates a variety of programs and events. The design by GBBN connects to the history of the Roundhouse and its importance to Pittsburgh’s past while repositioning the space to usher in its new role.

The Roundhouse will aim for LEED Gold Certification and is the first project to be tracked against Pittsburgh’s new resiliency standards. A partnership with Monmade has enabled the work of local artists and makers to be seeded throughout the space, including:

Located in Pittsburgh’s Hazelwood neighborhood and situated along the Monongahela River, Hazelwood Green is envisioned to become a world-class model for sustainable development that is aligned with community and grounded in the principles of sustainability, equity, and inclusive economic opportunity.  This former urban brownfield is being transformed into a center for innovation, with a design vision that encompasses a mix of offices, research and development, light manufacturing, housing, retail, public green spaces, trails and transportation.