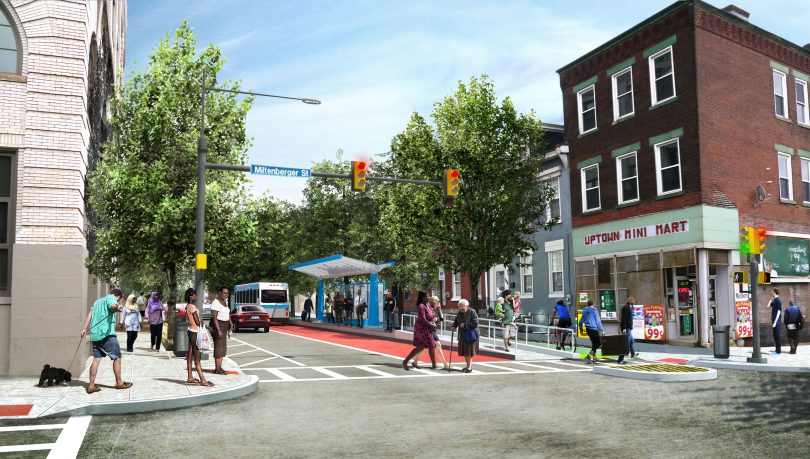 The URA is in the final stages of selecting a developer and plan to redevelop the two acres of publicly owned land at the intersection of Fifth Avenue and Dinwiddie Street in Uptown.

The proposed developer is a joint venture between Hill District developer Bridging the Gap, LLC and HB Development, LLC. The two have formed Fifth and Dinwiddie Investment, LLC.

The plan comes after extensive collaboration between the URA and the Uptown community. Community desire for development on the site goes back decades, with mixed-use development proposed in the 2011 Greater Hill District Master Plan. The site was then included in the 2015-2017 Uptown/West Oakland EcoInnovation District plan because of its key location for the proposed Bus Rapid Transit system connecting Downtown and Oakland with the East End.

The Department of City Planning worked together with the URA, and other partner agencies, to host a community design workshop in November 2017. Community members worked alongside non-profit staff and designers at tables to develop five detailed concepts for the site.

The detailed community vision was used to draft a Request for Proposals (RFP) that was subsequently released by the Urban Redevelopment Authority.

A community open house presented the outputs of the charrette for the rest of the community to review and comment on at a public meeting earlier this year.

Community organizations, elected officials, and City staff reviewed the RFP proposals and chose a plan that best fit with the community’s vision for the site.

Once finalized, construction is slated to begin in 2020.

Derek Duaphin, Senior Planner for the City of Pittsburgh at 412.255.4897 or derek.dauphin@pittsburghpa.gov