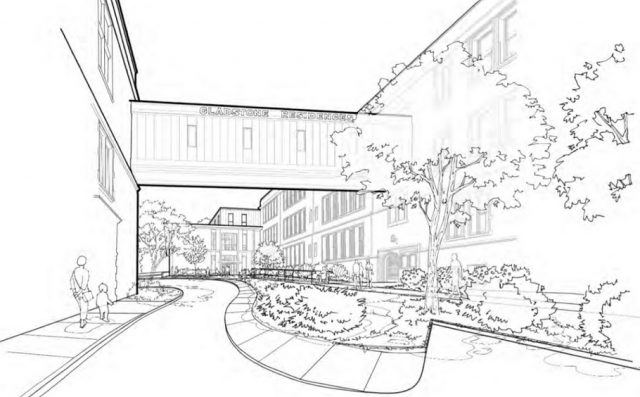 Gladstone Middle School, an iconic part of Hazelwood’s past, is becoming a critical part of its future.

For a long time after the closure of the LTV Steel mill in 1998, finding affordable places to live wasn’t a problem in Hazelwood. Thousands fled the neighborhood, leaving many of its modest hillside homes empty. In 2001, the population decline led to the closure of Gladstone, which was built in 1915.

The rise of the Hazelwood Green mega-development has played a big part in changing the neighborhood’s fortunes. Major institutions have pledged hundreds of millions of dollars in investment for the vast, vacant land along the Monongahela River where the LTV mill once stood. The potential of the Second Avenue commercial corridor and strong neighborhood institutions have also made Hazelwood more attractive.

And that means that rents and housing prices have been rising. But Hazelwood residents who stuck it out during the hard times don’t want to be left out of their neighborhood’s future.

A big part of that is centered around Gladstone Middle School, built into a steep Hazelwood hillside. The building is owned by the Gladstone Community Partnership LLC, a limited liability corporation created by the Hazelwood Initiative. The school’s main building is slated to become 51 apartments, 42 of them falling into various categories of affordability.

“It’s been vacant for almost 20 years, and the Hazelwood Initiative saw an opportunity to do two things: one, to preserve a historic building, and two, to start addressing the community’s pervasive affordable housing needs,” says Diamonte Walker, deputy executive director of the Urban Redevelopment Authority.