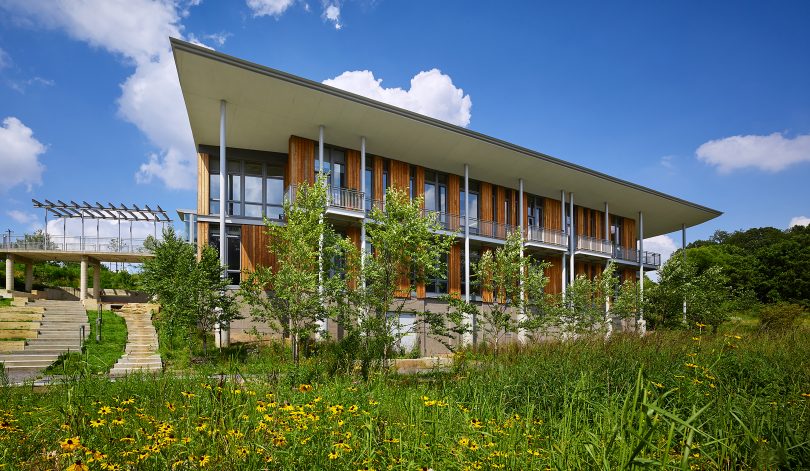 Completed in 2016, The Frick Environmental Center (FEC) embodies principles of equity, education, and stewardship. Free and open to all, the FEC is a four-season welcome facility, hub, and gateway to Pittsburgh’s 644-acre Frick Park. The net-positive, LEED Platinum, and Living Building-certified center is a project of the Pittsburgh Parks Conservancy and the City of Pittsburgh. Serving over 75,000 visitors annually, the FEC is part of an educational ecosystem for the Pittsburgh Parks Conservancy and provides the community with a living classroom and active forum for hands-on lessons in and conversations about sustainability.

“We are thrilled to be a recipient of this prestigious award. The Frick Environmental Center is a vibrant, welcoming facility that educates and impacts on many levels,” said Camila Rivera-Tinsley, Director of Education for Pittsburgh Parks Conservancy.

The FEC is the only project of the ten awardees this year to be recognized with a Plus award, which highlights projects with exemplary performance data and post occupancy lessons. The FEC uses 40-percent less energy than comparable benchmarks, and the energy used is offset entirely via solar and geothermal capture. The building is also designed for net-positive water use, with rainwater harvested for non-potable use, over 636,000 gallons of stormwater diverted annually, and wastewater processing taking place on site. In the two-and-a-half years since the FEC opened, Pittsburgh Parks Conservancy has reported a 142% increase in program participation, further testament to the value of this community asset.

“The Center’s pursuit of Living Building Challenge has reinforced the philosophy within our practice that sustainable design is not only the right thing to do ethically, but also an opportunity to make a richer and more evocative architecture,” remarked Patricia Culley, Senior Associate at Bohlin Cywinski Jackson and Project Architect for the FEC.

This is the third COTE Top Ten awarded to a Pittsburgh-region project in the past four years, and Bohlin Cywinski Jackson’s fourth COTE Top Ten Award. This year’s award recipients will be recognized at the 2019 AIA National Conference on Architecture, June 6 – 8 in Las Vegas, NV.

Founded in 1965, Bohlin Cywinski Jackson is a national architecture practice noted for elegant and humane design, ranging from modest houses to large academic, civic, cultural, and corporate buildings. To date, the firm has received more than 675 regional, national, and international awards for design, including three AIA Top Ten Green Project Awards and the AIA Architecture Firm Award. The firm is well known for its work with Apple, designing stores such as the iconic Fifth Avenue cube in New York City and flagship stores worldwide. The practice has also created headquarters for Pixar, Adobe and Square, and city halls in Seattle and Newport Beach, CA. For more information please visit www.bcj.com.

The American Institute of Architects (AIA) Committee on the Environment (COTE®) Top Ten Awards is the industry’s best-known award program for sustainable design excellence. Each year, ten innovative projects are recognized for their integration of design excellence with environmental performance. In order to be eligible, project submissions are required to demonstrate alignment with COTE’s rigorous criteria for 10 measures that include social, economic, and ecological values. The five-member jury evaluates each project submission based on a cross-section of the 10 metrics balanced with the holistic approach to the design. For more information, please visit www.aia.org.