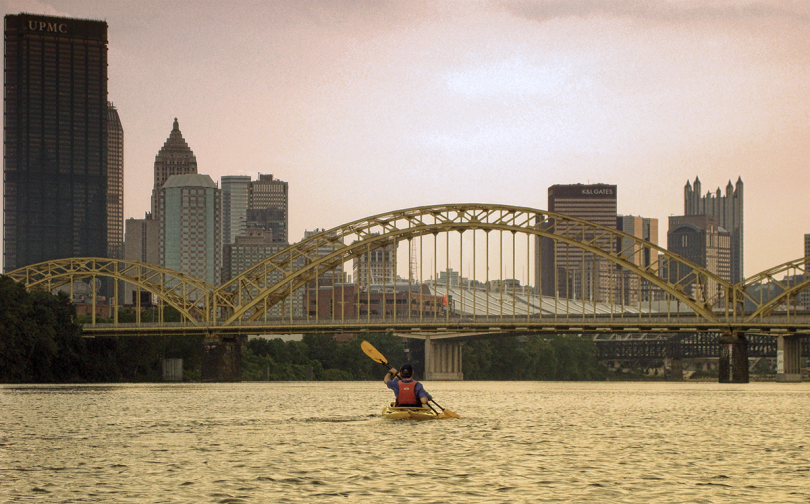 (PITTSBURGH) June 15, 2017 –  In the ongoing discourse around President Donald Trump’s decision to withdraw the United States from the Paris Climate Change Agreement — and his direct reference to being “elected by voters of Pittsburgh, not Paris,” – Pittsburgh’s political, community, business, and academic leaders continue to set the record straight on Pittsburgh’s current and past activities and commitments to green innovation, sustainable development, and combatting global climate change.

Excerpts from recent statements by Pittsburgh community leaders interested in the region’s ongoing support of the Paris accord are provided below, with links for further detail.  Learn even more about Pittsburgh’s ongoing green transformation–and the people, places, businesses, and organizations driving its progress at PittsburghGreenStory.com.

“I’m appalled that the President used my city to justify his unacceptable decision, as most other Pittsburghers are. I was one of the nation’s mayors who went to Paris to fight for the accords, and my city, which has finally bounced back from decades of industrial carnage, will do all it can to promote its own environmental standards.

“The future, as always, depends on our actions now – and the worldwide scientific consensus tells us that climate action is necessary and urgent. Walking away from the Paris Agreement is bad for our international standing, our economic progress, and our climate. In Pittsburgh, we know that we can both honor the past and recognize the promise of the clean energy industries of the present and future.”

As scientists who have dedicated ourselves to research on a wide range of issues related to energy and climate, we write to express our grave concern about the U.S. withdrawal from the Paris Agreement…

The White House cited the economic needs of the people of Pittsburgh – home to Carnegie Mellon, where the rigorous study of energy and climate are a top institutional priority – as one motivation to withdraw from the Agreement. We have a vibrant and growing city; birthplace of a global robotics movement, home to high-tech start-ups, test beds for autonomous mobility and smart lighting systems, and a model for next general urban development. We also have cutting edge energy research and development efforts that have generated greenhouse gas emissions inventories for the city, as well as climate impact and action plans. For these reasons, we are confident in saying that in the short run Pittsburgh does not stand to benefit substantially from the U.S. withdrawal from the Paris Agreement and in the long run Pittsburgh would lose. We enthusiastically support our Mayor in his commitment to honoring the terms of the Paris Agreement.

As the federal government begins the process of considering which conditions it would be willing to renegotiate, we call for a clear energy and climate policy from the administration that will lead to meaningful greenhouse emissions reductions. Failing to do so leads the country and the world into a place of increased uncertainty and danger. America led the world in starting to clean up air and water, and we profited by selling pollution reduction equipment to the world. This is not the time to cede America’s leadership to others.

“We have the technology and ability to build fossil-free net zero energy buildings; we are doing this now. There is no excuse for not meeting and exceeding the U.S. commitments to the Paris agreement. Let’s lead the world again!”

“Around the world and here in Pittsburgh, there’s a loud, growing chorus in the corporate world that understands that addressing climate change is not only the right thing to do, but is now a business imperative. The city of Pittsburgh is a global go-to town for having its eye on the cleaner, greener, more equitable new economy of the future.”

“President Trump’s announcement to withdraw from the Paris Accord represents a misunderstanding of the impact of science not only associated with climate change, but with energy technology and policy. And Pittsburgh is actually a perfect example of how research and innovation can transform a city.

Most American technological innovations were born with government support. Pittsburgh itself was like the mythological phoenix, reborn from the ashes of 19th and 20th century industrial revolution and collapse, because of strong public and private leadership. The energy solutions that can save the world tomorrow are being born today in incubators like Pittsburgh and Paris, Berlin, and Beijing.

Electricity generated from coal will continue to decline – not because of any war on coal, but because natural gas and renewables are now more efficient, abundant, and profitable. The renewable energy sector in particular is growing at a phenomenal rate, and is outpacing coal in employment numbers. This contributes to a change that is not only better for the environment, but better for people.

June 1 should be a New Earth Day for the 21st century, one that affirms science, looks to the future of our new energy economy, reinvests in the success of our citizens, and works toward protecting the only Planet Earth we have.

“Pittsburgh has a robust track record of local government, community groups, foundations, universities, and businesses working together to clean up the city’s riverfronts, with over 800 acres of water and green space in our downtown alone. We have wind-powered LEDs lighting one of our bridges. The city has an array of state-of-the-art green buildings like the PNC Tower and David Lawrence Convention Center, which are some of the largest and most efficient in the world. The riverfronts are cleaner and greener now. All of these improvements came about because of public-private partnerships working together to reflect the values and aspirations of the people who live here.”

“[Pittsburgh has] built a balanced, knowledge-intensive economy… from a robust financial services sector and state of the art manufacturing operations up and down our rivers, to a diverse energy industry and fast-growing information technology companies making everything from software to self-driving cars.  We have created a valuable energy portfolio, and our energy expertise is diverse, with strategic assets in nuclear, renewables, and yes, coal. We’re pioneering microgrids and we’ve emerged as a national leader in green building. We invest more than $1 billion annually in energy innovation. We’re using all that energy to live, work and play in balanced and responsible ways… and to export innovation around the world.

A generation ago we learned the hard way that a “one-size-fits-all” approach to economic and community development is not practical or effective. Assets vary widely across our ten counties. The strategies to leverage those assets to improve our economy vary as well across the urban, suburban and rural landscape. “Either/Or” is a false choice. “Both/And” rebuilt our region and positioned us for the future.

… Today’s Pittsburgh story includes both the robotics, healthcare and financial services of our urban core and the energy and manufacturing that provide opportunity throughout our region. We are not willing to accept one without the other and expect the same from our public dialogue. 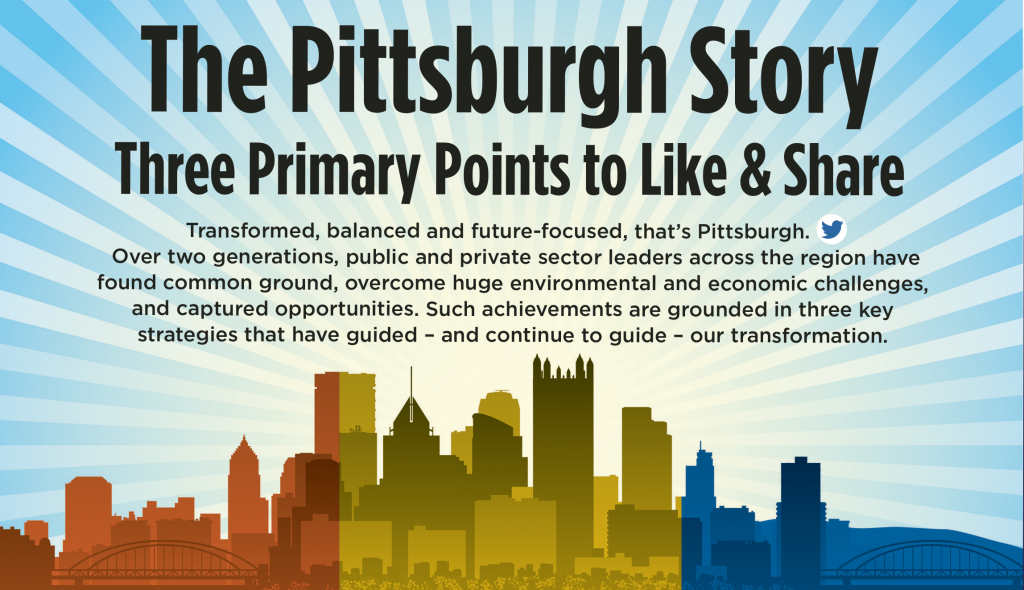 For a social media guide to stories in the region, visit alleghenyconference.org.

Pittsburgh Green Story is a collaborative and growing partnership of organizations who are champions of Pittsburgh’s legacy, current, and future green story; it is a project of Green Building Alliance and is funded by the Richard King Mellon Foundation.