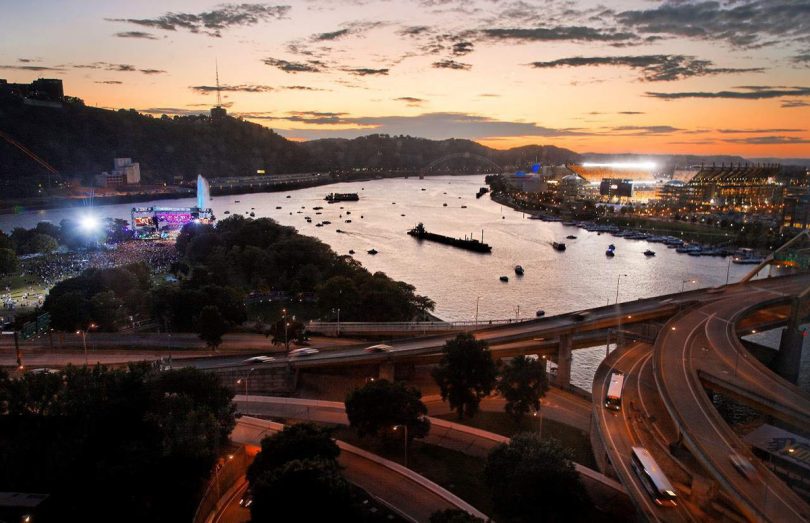 A barge moves up the Allegheny River through boats moored for the concert and game. Photo credit: VisitPittsburgh

Pittsburgh has been awarded a $19 million federal grant to reunite the historic Hill District with the city’s downtown business and cultural district. The grant, awarded to the Sports and Exhibition Authority (SEA) through the Transportation Investment Generating Economic Recovery, or TIGER, program, will help build a tree-lined green space and deck over Interstate 579 and Crosstown Boulevard, re-establishing a walkable link to a neighborhood that lost direct access to the City’s downtown more than 50 years ago.

The three-acre “cap” will include tree-lined ADA-compliant pedestrian and bike pathways, green space and other public amenities, but most importantly will re-establish connectivity to employment and education centers, cultural amenities, transportation and services in the Downtown area.

“This award will help heal one of Pittsburgh’s worst efforts at urban renewal, when decades ago city planners separated the Hill District from Downtown and cut the life-blood from one our most historic communities,” stated City of Pittsburgh Mayor Bill Peduto, referencing the construction of the Civic Arena and other development activities in the 1950s and 1960s. At that time, dozens of blocks of homes and businesses were demolished in the Lower Hill to clear space for the arena, essentially separating the Hill from the Downtown area. During that same time, the Crosstown Boulevard was built, creating an additional barrier.

The Civic Arena was razed in 2011, and since then the street-level space has primarily served as surface parking. The Pittsburgh Penguins hockey team owns the rights to 28 acres of land where the arena used to sit, and is developing plans for new housing, retail and office space. The SEA plans to begin work on the $26.4 million deck over Crosstown Boulevard/Interstate 579 in mid-2017, with construction projected to last approximately two years. Landscape architecture firm LaQuatra Bonci Associates has been selected for the deck project design.

The SEA and landscape architecture firm LaQuatra Bonci Associates conducted several months of  outreach, presenting design ideas and hundreds of pictures from parks worldwide to help community members decide what they want in a park.

A major priority is to relate the park to the history and culture of the Hill District and what the Hill meant to Downtown. The plans so far include kiosks where food can be sold, possibly by Hill District business owners, and a “great lawn” and spaces for events and concerts.