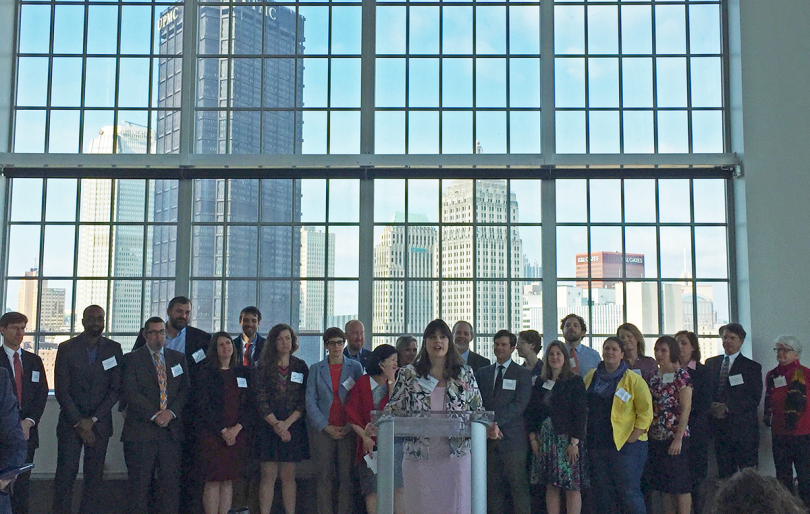 (Pittsburgh, PA)  Today, in the run up to Earth Day 2017, two dozen CEOs of Western Pennsylvania’s environmental nonprofit organizations stood together to proclaim the importance of environmental protection for the region’s economic resurgence, public health, and social equity.

During a press briefing at the Energy Innovation Center in Uptown, the group of CEOs emphasized the critical need for residents and organizations to forestall any backsliding on environmental progress.  They called for a collective commitment to the region’s bright future based on equitable development that is restorative of our people, our natural environment, and our communities.

The Pittsburgh region finds itself at a critical moment.  Legacy environmental problems as well as new environmental threats are coupled with federal level efforts to roll back progress.  Meanwhile, the region is positioning itself with a cleaner innovation economy, bringing the promise of increasing job growth, improving public health, and environmental justice.

The CEOs urge residents to:

Four representatives spoke on behalf of the large group of CEOs as part of the unified call on the public to engage in environmental protections.

Michelle Naccarati-Chapkis, CEO of Women for a Healthy Environment, stated, “The stakes are too great for our families and future to just stand idly by and wait for others to act.  Now is the time for all to speak on the values of a healthy environment and communities.  Now is the time to strengthen the protections we set for our families and the region.  We have witnessed proposed cuts at the federal level, which would directly impact the ability of state and local governments to protect our health and environment,” she said.  “This includes potential cuts to programs which ensure access to safe drinking water, cleanup of hazardous waste sites, and remediation of landscapes impacted by nonpoint source pollution.  We must maintain funding to these vitally important initiatives, and protect the mandates that safeguard the health of our region.”

The CEOs stand together to celebrate the region’s formula for success, whereby economic prosperity and environmental quality are mutually interdependent.  They commit to uniting public health and environmental integrity with economic progress, ensuring the future resilience of neighborhoods and towns.

Scott Bricker, Executive Director of Bike Pittsburgh, said, “We must come together as a region to pick up the slack as our federal government commits to roll back environmental regulations and community development funds.  These cuts will make the poor even poorer.  Elimination of programs such as the Low Income Home Energy Assistance Program will hurt those among us who already suffer the most.  Cuts to Federal Transit Administration’s Capital Investment Program such as New Starts and Small Starts will pull the rug out from under public transportation projects around our region such as the Bus Rapid Transit project, which aims to connect thousands of Pittsburghers to jobs and improve conditions for walking and biking.”

Mr. Bricker added, “We know that the so called ‘deconstruction of the administrative state’ will only increase costs, exacerbate health disparities, and worsen not only our quality of life, but the quality of life of future generations.  We must stand up, speak out, and take action.”

“We must make sure that all residents of Pittsburgh, Allegheny County, Southwestern Pennsylvania and beyond have access to outdoor open space, clean water and clean air,” said Vivien Li, President and CEO of Riverlife. “We as a community must plan for a future in which climate change will have a direct impact on every man, woman and child, regardless of income, race or residence.”

Quincy Kofi Swatson, Executive Director of The Door Campaign said, “If you believe our community’s future depends upon our continued progress, we must speak up on every issue.  As we 24 CEOs gather here to celebrate Earth Day we also represent a united front against injustices.  We urge all persons of the Pittsburgh region to also stand with us by letting their representatives at all levels of government know what issue they most care about, including how the environment and its care is the bedrock of true economic progress.  If our elected officials do not hear from their constituents about injustices that you care deeply about, then they will be left to assume there is no interest in fighting for them.  We need to remind all that risks to our region’s environment are risks to our families and future, and that we stand firm to defend them.  We need your help in carrying this message on Earth Day.”

To join the community protecting our environment, visit CEOsforEarthDay.org.

The organizations at the press event are led by the following: