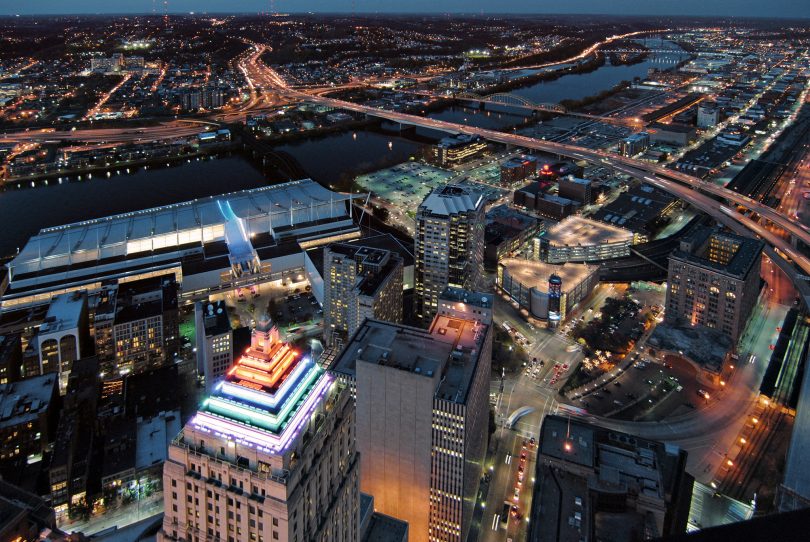 View from the U.S. Steel Tower, one of the 25 projects to be honored at GBA's 25th Anniversary Gala. Photo courtesy of the GBA.

For a quarter century, the green building movement has steadily gained momentum in the United States. Western Pennsylvania has been at the forefront of this movement, resulting in the completion of projects noted around the country and the world for excellence in sustainable design, construction, and operation.

In 1993, as the U.S. Green Building Council held its first meeting, a group of environmental advocates in Pittsburgh took the first steps to bring these ideals to life by establishing the Green Building Alliance.  Since then, sustainable innovations across Western Pennsylvania include 370 LEED-certified buildings, four Passive House structures, as well as six AIA COTE Top 10 Award Winners. More than 500 buildings (representing 87 million square feet) in the Pittsburgh 2030 District have committed to deep reductions in energy use,  water consumption, and transportation emissions, all while improving indoor air quality – an achievement that places Pittsburgh first among North American cities striving to meet the 2030 Challenge’s ambitious goals.

Pittsburgh is also home to two projects that have met the rigorous Living Building Challenge certification (Phipps Conservatory & Botanical Gardens’ Center for Sustainable Landscapes and Frick Environmental Center), a status equaled only by Seattle.  The region’s leadership in the adoption of Passive House standards for ultra-low energy buildings is evidenced by Carnegie Library’s $4.3 million rebuild of its Carrick location, which if awarded certification, will be the first Passive House library in North America. View more information about Pittsburgh’s green building statistics here.

The Green Building Alliance celebrated its 25th anniversary by honoring 25 projects in Western Pennsylvania completed from 1993 through May 2018. They are:

ABOUT GREEN BUILDING ALLIANCE: Green Building Alliance (GBA) advances innovation in the built environment by empowering people to create environmentally, economically, and socially vibrant places. Founded in 1993, GBA is one of the oldest regional green building organizations in the United States.  GBA proudly serves Pittsburgh and the 26 counties of Western Pennsylvania, with stakeholders across the Mid-Atlantic, the United States, and the world.