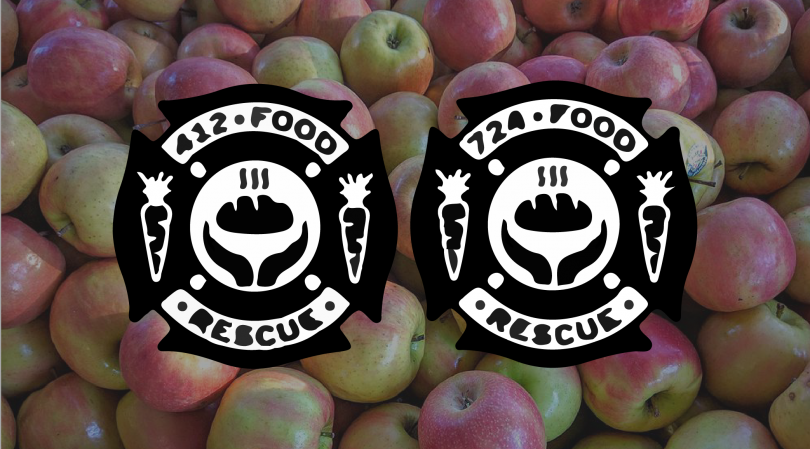 Pittsburgh, PA / September 5, 2017: Since the launch of 412 Food Rescue, nearly 2 million pounds of good food has been saved from going to waste in Allegheny County and instead distributed to communities in need. Now 412 Food Rescue is bringing these efforts to Beaver, Butler, Westmoreland, Fayette and Washington counties with the launch of 724 Food Rescue.

Food waste is a global problem impacting both the environment. Globally (and domestically) 40% of food produced goes to waste. That is enough to end world hunger four times over. 412 Food Rescue is the only food recovery organization in South Western PA solely focused on recovering food before it’s wasted as a solution to hunger.

The program, launching in September, will kick off with a rescue from Farm Aid occurring at KeyBank Pavilion on September 16th.

“Farmers put hard work into growing the quality food that will be served at Farm Aid 2017, and it’s far too precious to be wasted. Everyone, everywhere deserves healthful food,” said Farm Aid associate director Glenda Yoder. “We are proud to partner with 412—and now 724–Food Rescue, which brilliantly combines the power of technology and community to efficiently deliver good food and eliminate food waste.”

Food rescued from the event will be distributed in Washington County at the Burgettstown Apartments, in partnership with American HealthCare Group–an organization that provides Supportive Services in affordable housing communities for both families and seniors.

“When we launched 412 Food Rescue, the housing authorities that we work with were a key partner in expanding the safety net for those in need,” noted Erin Hart, 412 Food Rescue founding board member and American Healthcare Group Director. “They’ve been able to end food emergency calls in the Housing Authority of the City of Pittsburgh, we’d like to see that replicated across the region.”

With a focus on prevention and creating healthy lifestyles, American HealthCare Group’s service coordinators partner with 412 Food Rescue, and now 724 Food Rescue, to distribute fresh, healthy food in the communities they serve. “We couldn’t have asked for a better partner. Their mission to enhance the quality of life through health and preventative services dovetails perfectly with our goal to provide healthy food for all,” added Lizarondo.

Michael L. Washowich, Executive Director of the Westmoreland County Housing Authority, a founding non-profit partner for 724 Food rescue, noted that “Many of our residents, both families and elderly, know true hunger and do without adequate food for portions of each month.  With 724 Food Rescue’s generous donors and volunteers, that can change; and we are grateful.”

The response from donors has been enthusiastic as well. Four donors, Giant Eagle, Sysco Foods, Aldo Foods and Waypoint Foods have agreed to regular donations of surplus food to anchor the 724 Food Rescue kick off.

“We are so excited to help launch 724 Food Rescue” noted Marta Napoleon from the family-owned food distributor Aldo’s Frozen Foods in Aliquippa.  “Their model of distributing perishable food into the communities that need it makes so much sense and we are proud to work with them. The last thing we want is to see good food go to waste. It makes us incredibly happy to be part of bringing this project to Butler and Beaver County.”

To date, 412 Food Rescue has redirected over 1.8 million pounds of perfectly good food from going to landfills. The organization works with over 250 food retailers, 300 nonprofit partners and over 1500 volunteers. 724 Food Rescue which will pilot with 8 donor locations and 10 nonprofit partners will serve the estimated 122,000+ food insecure individuals in the 5 county area. 412 Food Rescue launched in 2015 with support from individuals and organizations led by The Henry L. Hillman Foundation, The Pittsburgh Foundation, The Heinz Endowments, and BNY Mellon Foundation.

412 Food Rescue launched in 2015 to address the disconnect between the fact that 40 percent of food produced in the United States is wasted while one in seven go hungry. Utilizing technology to solve the logistics challenge of retail food recovery, 412 Food Rescue is the only organization in the Southwestern PA region that focuses on food that would otherwise be discarded, impacting not only hunger but also the environment. 412 Food Rescue’s goal is to introduce innovative solutions to eradicate food waste in the region and expand its model to cities around the country. To date, 412 Food Rescue has redirected over 1.8 million pounds of perfectly good food from going to landfills. The organization works with over 250 food retailers, 300 nonprofit partners and over 1500 volunteer drivers, our Food Rescue Heroes.

Farm Aid’s mission is to build a vibrant, family farm-centered system of agriculture in America. Farm Aid artists and board members Willie Nelson, Neil Young, John Mellencamp and Dave Matthews host an annual festival to raise funds to support Farm Aid’s work with family farmers and to inspire people to choose family farm food. For more than 30 years, Farm Aid, with the support of the artists who contribute their performances each year, has raised more than $50 million to support programs that help farmers thrive, expand the reach of the Good Food Movement, take action to change the dominant system of industrial agriculture and promote food from family farms.

American HealthCare Group brings preventative services and on-site health programming into schools, employer groups, and affordable housing locations across Pennsylvania and nationally. Based in Pittsburgh, PA AHG has been a part of the region’s healthcare industry for close to 40 years, guided by the mantra: “The Future of Healthcare is Ours to Create.” Bringing preventive services to schools, affordable housing, communities and employer groups makes up the core of their services.  Their Supportive Services Programming fulfills the role of health, wellness and social services coordinator for agencies and facility owners involved in the oversight of public housing. Because of these initiatives, American HealthCare Group has branched into designing two dynamic programs, Pathways to SmartCare Employee Wellness Program and Farm to Table Pittsburgh.