Pittsburgh has stark differences in income by race, but broadly looking at white versus minority residents does not paint the full picture. Pittsburgh Today has used census information and the Pittsburgh Regional Quality of Life survey to dig deeper into the income inequality of the region.

Asian residents, for example, had a median annual household income of about $57,000 in 2010, the highest of any racial or ethnic group in the Pittsburgh MSA, including white residents. And although they represented only 1.7 percent of the population, they accounted for almost 4 percent of residents in the region with a bachelor’s degree. 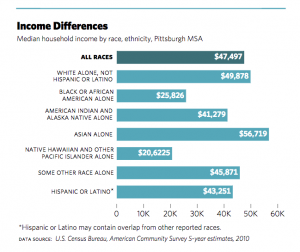 African Americans are clearly the most vulnerable to inequities across social and economic indicators. In 2010, they represented 8.3 percent of the Pittsburgh MSA population, but accounted for an estimated 4.2 percent of the region’s homeowners. And at about $25,826, their median annual household income was the lowest of any racial or ethnic group in the region.

The Pittsburgh Regional Quality of Life Survey also suggests there are stark racial differences among residents who are facing financial hardship. For example, nearly 18 percent of African Americans report they often or always have trouble paying for basic necessities – more than twice the rate reported by non-African American residents, according to the survey by the University of Pittsburgh University Center for Social and Urban Research.