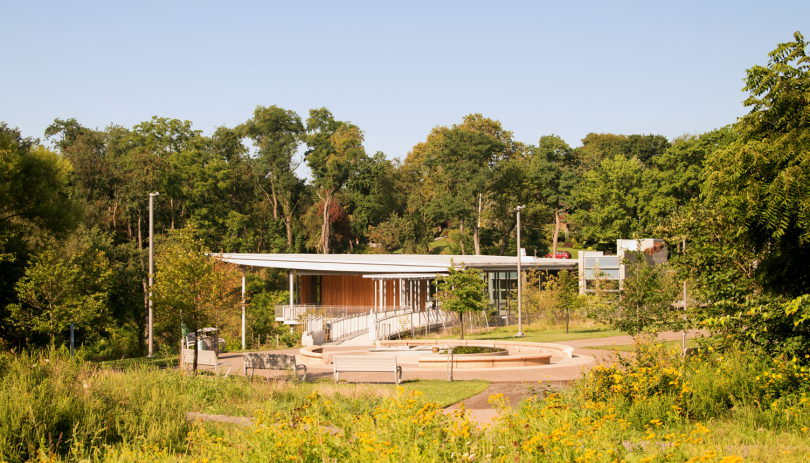 The Frick Environmental Center (FEC) has earned yet another prestigious accolade for its design and construction, as it was recently awarded the Leadership in Energy and Environmental Design (LEED) Platinum  Platinum Certification. LEED, a national certification system developed by the U.S. Green Building Council (USGBC), encourages the creation of healthy, highly efficient and cost-saving green buildings. LEED certification is a globally recognized symbol of sustainability achievement and Platinum Certification is the USGBC’s highest level of recognition.

Meg Cheever, President and CEO of Pittsburgh Parks Conservancy, said, “We have known the Frick Environmental Center is one of the greenest buildings in the world, and it’s great to have that reinforced with the new LEED Platinum Certification.”

In September, the Environmental Center was recognized by the Green Building Alliance, receiving their inaugural Leadership Award for its role in a decade-long vision of incorporating the world’s highest sustainability standards into a free and public, municipally-owned building. The Environmental Center is also working towards achieving certification through the Living Building Challenge, widely recognized as the world’s most rigorous and complete sustainable building standard.  The Parks Conservancy, in conjunction with the architect, Bohlin Cywinski Jackson and construction manager, PJ Dick, Inc., designed and built the Center to use 40 percent less energy than comparable benchmarks. The energy that the Environmental Center uses is produced entirely on site via solar and geothermal capture.  The building is also designed for net-zero water use, harvesting rainwater for all non-potable uses and processing all wastewater on site.

The Pittsburgh Parks Conservancy was founded in December1996 by a group of citizens concerned with the deteriorating conditions of Pittsburgh’s historic city parks.  A nonprofit organization, the Parks Conservancy works closely with the City of Pittsburgh under an official public-private partnership agreement to restore and improve the city’s park system to its full potential. Originally including Highland, Schenley, Frick, Riverview, and Emerald View Parks, the scope of the Park Conservancy’s work now includes a focus on community parks including Allegheny Commons, Arsenal Park, August Wilson Park, McKinley Park, and Mellon Park. To date, the Parks Conservancy has raised $100 million toward park improvements. The Parks Conservancy works with thousands of volunteers annually, has completed 17 major park improvement projects, and is active in 22 regional, neighborhood, and community parks.

Founded in 1965, Bohlin Cywinski Jackson is a national architecture practice noted for elegant and humane design, ranging from modest houses to large academic, civic, cultural, and corporate buildings. To date, the firm has received more than 650 regional, national, and international awards for design, including three AIA Top Ten Green Project Awards and the AIA Architecture Firm Award. In 2010, Founding Principal Peter Bohlin was awarded the AIA Gold Medal, the highest honor an individual architect can receive. The firm is well known for its work with Apple, designing stores such as the iconic Fifth Avenue cube in New York City and flagship stores worldwide. The practice has also created headquarters for Pixar, Adobe and Square, and city halls in Seattle and Newport Beach, CA. For more information please visit BCJ.com.