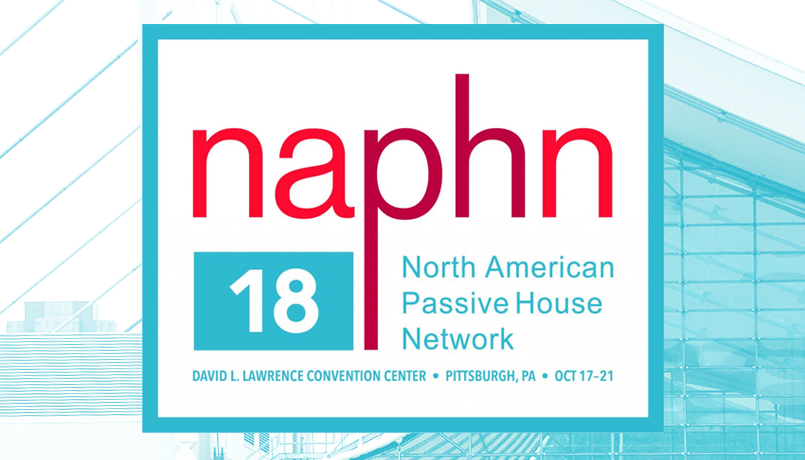 Pittsburgh, PA: The North American Passive House Network (NAPHN) announced today that its 2018 national conference will be held on October 17-21 in Pittsburgh. Over 1,000 architects, designers, engineers, developers, policymakers, and high performance building consultants will convene at the David L. Lawrence Convention Center to share research, field experience, and sustainable business strategies regarding Passive House.  The conference will be produced by the local NAPHN affiliate, Passive House of Western Pennsylvania (PHWPA).

Passive House is the world’s most rigorous standard for building energy efficiency, reducing building energy use by as much as 75% while providing superior health and comfort to occupants. A rapidly growing global Passive House industry has used the standard to construct homes, residential high rises, office buildings, hotels, prisons, schools, hospitals, supermarkets, and mixed-use buildings.

The conference will also provide an opportunity for product manufacturers to engage with building decision makers.  As the number and size of Passive House buildings increases, there are more opportunities for a wider range of products to be considered.  NAPHN18 attendees will be looking for products that perform at different levels tailored to specific projects; not just the highest performer.

“Your [North American Passive House Network’s] efforts can make a major contribution to the sustainable development goals and the Paris agreement on climate change. Innovations in building and energy science have now opened new vistas…Passive House buildings are at the frontier of technology and know-how.” – Amina Mohammed, Deputy Secretary General of the United Nations, addressing the NAPHN 2017 conference in Oakland, CA.

Pittsburgh and Pennsylvania have emerged as national leaders in Passive House development. Spurred in part by state housing policy, a burst of affordable, multifamily Passive House building construction is underway in the city and across the state. Mayor Bill Peduto, famously committed to the goals of the Paris climate agreement after Donald Trump’s “Pittsburgh, not Paris” pronouncement last June, has embraced this wave of Passive House development. He recently led the groundbreaking ceremony at Morningside Crossing, a redevelopment of the abandoned Morningside Elementary School into an affordable Passive House community for seniors.

The NAPHN18 conference will feature case studies and tours of projects like Morningside Crossing, capitalizing on the community of practice that has matured in Pittsburgh, home to one of the largest concentrations of major Passive House projects in the country.

PHWPA is dedicated to lowering energy use in buildings by providing education, promoting awareness, sharing resources, and advocating for Passive House strategies for commercial and residential buildings in the Western Pennsylvania region. http://www.passivehousewpa.org