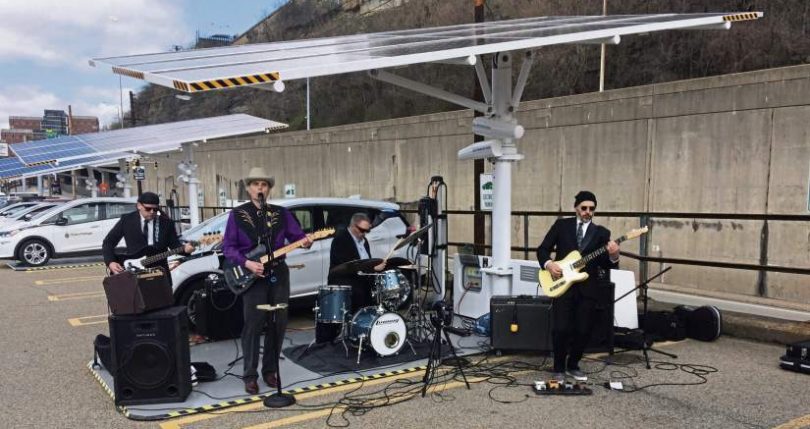 “These solar charging stations will not only help us expand our portfolio of electric vehicles but also assist Pittsburgh’s resilience efforts. They will provide us with a new power source during the increasingly common severe weather events that take the rest of the power grid down,” Mayor Peduto said.

The units from Envision Solar International in San Diego are also equipped with emergency power (E-power) panels, which allow for their use as emergency generators during disasters or other grid outages.

The City currently has four electric vehicles in its fleet. Later this spring the Department of Permits, Licenses and Inspections will be receiving another six new Chevy Bolts. All will be charged at these stations.

The stations are currently for the City fleet only but plans are ultimately to allow them for use by the public.

“Charging an EV with the EV ARC reduces these carbon emissions by 100%. You are driving on sunshine,” said Chuck O’Neill, the city’s senior manager of fleet and assets.

Enough solar energy is captured in one day to charge up to 225 miles of electric driving per day. Driving 10 DPLI cars consistently on sunshine each year saves more than $8,000 per year in fuel costs.

The cost of each unit was $84,000 but the City will be reimbursed half of the cost through the State’s Alternative Fuels Incentive Grant (AFIG).