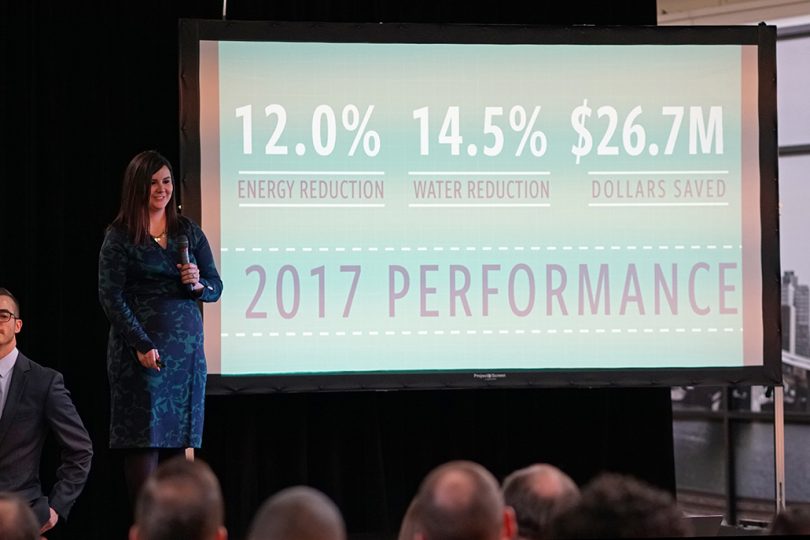 (PITTSBURGH) –  With the release of the Pittsburgh 2030 District 2017 Progress Report, Pittsburgh holds its place as the North American city with the most buildings formally committed to deep reductions in energy use, water consumption, and transportation emissions, as well as to improvements to indoor air quality.

Pittsburgh leads all 19 established 2030 Districts in the world with 81.7 million square feet committed. The Pittsburgh 2030 District, a strategic initiative of the Green Building Alliance, represents 506 buildings that are actively working to achieve 50 percent reductions in energy use, water consumption, and transportation emissions by the year 2030 (below baselines). The buildings represent a variety of sectors, including office towers, hospitals, multifamily residential buildings, universities, professional sports facilities, and museums 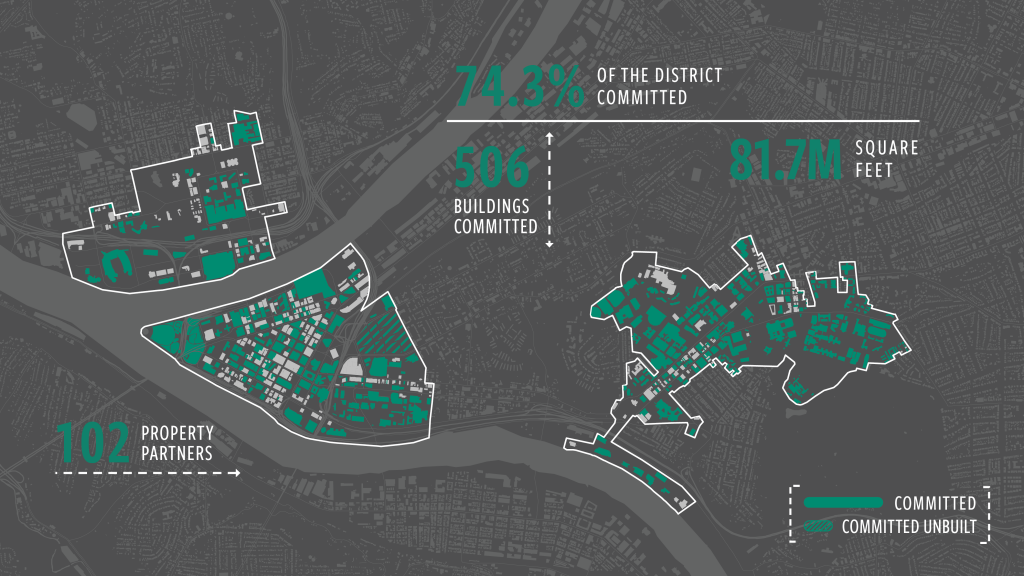 In 2017, 2030 District Property Partners avoided 1.1 billion kBtu of energy and nearly doubled their water use reduction, leading to a combined $26.7 million dollars in savings. The District has collectively saved $85.4 million in energy and water costs since 2012, while avoiding 434,400 metric tons of CO2.

Pittsburgh 2030 District Accomplishments by the Numbers (2017):

Building on partners’ quantifiable successes, the Pittsburgh 2030 District also launched the city’s first indoor air quality (IAQ) survey. In partnership with the University of Pittsburgh’s Mascaro Center for Sustainable Innovation, the District recorded more than 300 buildings’ design, construction, operations, and maintenance practices, which will contribute to the development of a measurable IAQ metric for 2018 and beyond.

The Pittsburgh 2030 District also continues to define building standards throughout Pittsburgh’s diverse communities. The Uptown EcoInnovation District and Pittsburgh riverfront zoning overlays base their development incentives on the 2030 Challenge energy metric, while the City of Pittsburgh’s Climate Action Plan 3.0 calls out 2030 goals for energy, water, and transportation emissions reductions.

“2030 partners have pushed us to rethink how we build communities,” says Pittsburgh Mayor William Peduto. “With their leadership and experience, we can create a sustainable and healthy city for everyone.”

ABOUT THE PITTSBURGH 2030 DISTRICT: The Pittsburgh 2030 District is an internationally recognized, locally driven initiative that supports building owners and managers as they strive toward 50 percent reductions in energy use, water consumption and transportation emissions by 2030, while improving indoor air quality. The District drives industry-leading performance through peer-to peer learning, technical trainings, and data benchmarking. A private-public-nonprofit partnership, the Pittsburgh 2030 District is facilitated by Green Building Alliance (GBA).

ABOUT GREEN BUILDING ALLIANCE: Green Building Alliance (GBA) advances innovation in the built environment by empowering people to create environmentally, economically, and socially vibrant places. Founded in 1993, GBA is an independent nonprofit organization and one of the oldest regional green building organizations in the United States. GBA proudly serves Pittsburgh and the 26 counties of Western Pennsylvania, with stakeholders across the Mid-Atlantic, United States and the world.