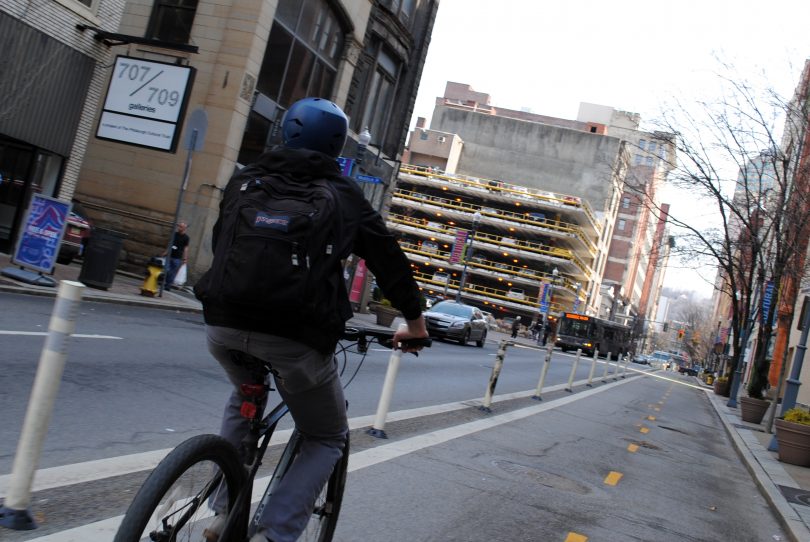 As Pittsburgh becomes more accessible by bike and by walking, more and more safety concerns are being raised. Bike Pittsburgh’s report on Pedestrian and Bicycle Safety found that, on average, pedestrian is hit every 34 hours in Pittsburgh. Furthermore, a bicyclist is involved in a crash every 6 days.

Transit Source, RoadBotics, and LaneSpotter have moved towards making Pittsburgh safer for bikers and pedestrians.

The Sentinel Box is a bike-mounted piece of hardware that detects and reports close calls for cyclists, or events where a motor-vehicle narrowly passes a bicycle. Pennsylvania mandates four feet between bikers and drivers, which is hard to enforce. The Sentinel Box will make it easier to carry out the four foot distance by interfacing with the cyclist’s smartphone to record GPS location, time of day, passing distance, moving speed of the passing vehicle and a picture of the event. The data is sent to a central database where records can be viewed by users. While currently only a prototype, it is being tested by the City of Pittsburgh in its Pgh Lab initiative—an effort to reduce city expenses through innovation.

The Sentinel Box can make Pittsburgh safer for bikers by recording problem areas for the City to increase traffic calming patters and more bike lanes. It can also help individual bikers plan their routes more safely, avoiding areas where drivers can be more aggressive. The goal of the Sentinel Box is to inform city-planning decisions with bikers in mind, creating not just convenient locations for bike lanes but places where they are most needed.

Watch more about the Sentinel Box below:

RoadBotics, out of Carnegie Mellon University’s Traffic21 Institute, is new technology on cars that enables inexpensive, continuous, and accurate infrastructure inspection and inventory. RoadBotics is trying to take our city’s infrastructure from merely being managed to thriving– each mile of road takes $8,000-$10,000 per year to maintain. But RoadBotics examines where on each street there is debris, signage issues, or potholes to better target safety issues on the road and improve them more quickly.

The company offers a lost-cost, smart-phone based monitoring solution for municipalities and contractors to assess road conditions. Their technology enables continuous coverage of all roads at regular intervals. Users are able to understand and analyze how each dollar of investment impacts their road infrastructure well into the future.

Any improvement to the maintenance of streets and increased safety of drivers, bikers, and walkers is making the city more safe. RoadBotics is using technology-based innovation to help ‘complete’ our streets and make them safer for all kinds of transportation.

Watch below for a demonstration of RoadBotics in action:

LaneSpotter is a new mapping system that helps bike riders “find the safest route from Point A to Point B.” Pittsburgh is one of the three cities already hosting LaneSpotter, with another 20 on the wait list.

Local cyclists contribute their first-hand knowledge of Pittsburgh’s street safety in this locally-sourced model. It is a communal effort to increase ridership in Pittsburgh while increase biker safety. Bikers can type in their starting and end points and find the safest route through the city. View their homepage and facebook page here.

LaneSpotter is hosted by AlphaLab. 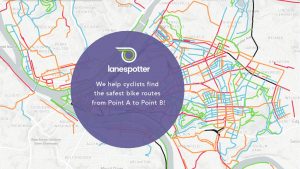