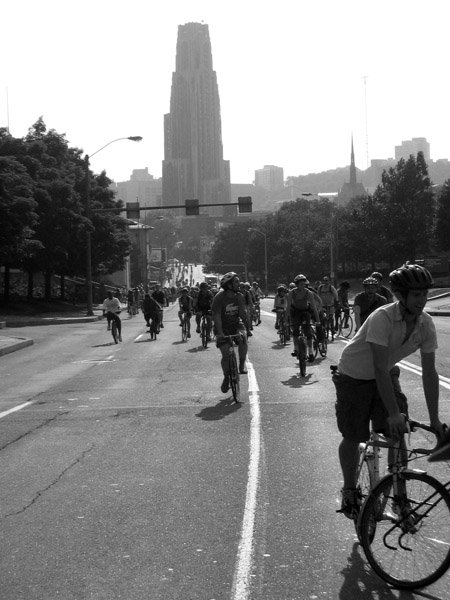 Scott Bricker was shocked by Pittsburgh’s lack of bike infrastructure when he returned to Pittsburgh from San Francisco in the early 2000s. 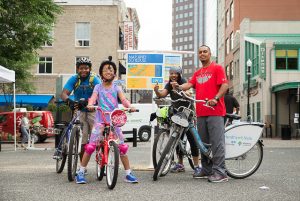 Bikers having a blast at Open Streets Pittsburgh, courtesy of BikePGH

A graduate from Carnegie Mellon University, Bricker began to push to show Pittsburgh that investments in bike infrastructure could have similar big payoffs to investments already made in San Francisco. 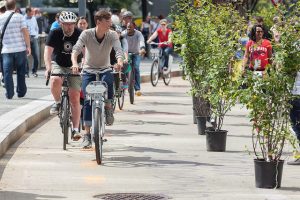 After fifteen years with BikePGH, twelve as executive director, Bricker has Pittsburgh become a more bike and pedestrian-friendly city. There are now over seventy miles of on-street bike markings from simple sharrows to the safer protected bike lanes. There are thousands of bike parking welcoming bike riders to business districts, and the Port Authority has outfitted all of its buses with bike racks and lifted peak hour restrictions on the T.

Bricker has also helped change the attitude in Pittsburgh, where BikePGH’s mission is becoming institutionalized. Pittsburgh now has a complete streets law, a dedicated bike and pedestrian planner, a director of mobility and infrastructure, a multimodal planning philosophy, and a zoning ordinance that requires bike parking in every new development. Additionally, the Allegheny County Health Department is pushing a “health in all policies” approach, complete with the County providing funding for municipalities to develop their own complete streets plans. 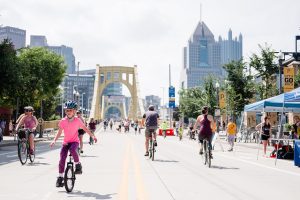 There is more work to do in Pittsburgh “to address the many societal issues that bicycling and walking address: personal health, the environment, affordability, equity, transportation safety, and access.” Bricker’s love of the city and his desire to keep improving it is what keeps him here in Pittsburgh.

When it comes to Pittsburgh’s green future, Bricker hopes “to see more people have access to modes of transportation that are active, affordable, safe, add to a sense of place, and are less polluting.” He knows that by getting “thousands more people out of their cars and taking public transit,” Pittsburgh’s air quality will improve and our contribution to climate change gases will be reduced, while at “the same time-saving people money, providing access to jobs and opportunities, save lives, and create more vibrant places.”