Courtesy of Pittsburgh Today
According to Pittsburgh Today:
“Vacancy rates in residential housing are a good barometer over time of the demand for shelter in a region. According to the Census, unoccupied housing units are considered vacant. Vacancy status is determined by the terms under which the unit may be occupied, e.g., for rent, for sale, or for seasonal use only. A housing unit is classified as occupied if it is the usual place of residence of the person or group of people living in it at the time of enumeration. This includes owner-occupied units as well as renter-occupied units.”
The following are statistics on housing vacancies in counties in Western Pennsylvania, Eastern Ohio, and West Virginia. Every county in Western Pennsylvania has seen vacancies rise from 2000-2010. 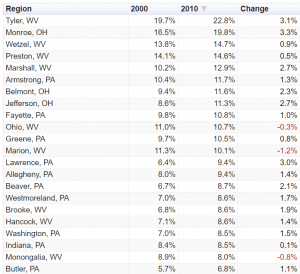 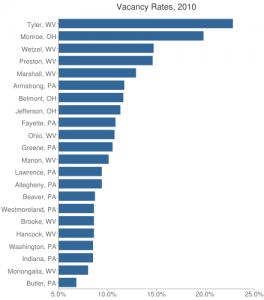