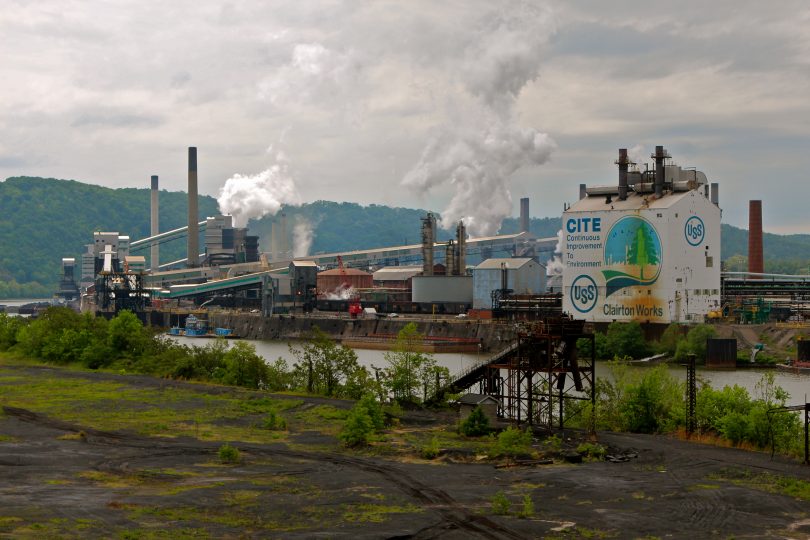 (June 28, 2018) PITTSBURGH, PA. – After months of citizen action and public pressure as a result of PennnFuture’s Toxic Neighbor Campaign and legal work, the Allegheny County Health Department today issued an enforcement order against U.S. Steel’s Clairton Coke Works, stating the company now faces a $1 million fine and the possibility of two batteries at the plant being forced to shut down if changes are not made swiftly.

According to the Allegheny County Health Department (ACHD) in addition to a fine of over $1-million dollars, U.S. Steel is required to submit a comprehensive assessment of its coke batteries to ACHD within 60 days of receipt of the order.

“This action by the county is further evidence of what Clairton residents who have suffered for years have known all along – that U.S. Steel is a bad actor and Clairton Coke Works is a Toxic Neighbor that must come into compliance with the law in order to stop the harm it has done to citizens’ health in this neighborhood and the region,” said Jacquelyn Bonomo, President and CEO, PennFuture. “Citizens from Pittsburgh’s East End and neighbors who participated in PennFuture’s Toxic Neighbor campaign shined a light on this issue with a passion we have not seen before, and we will continue our work to make sure that vulnerable communities like Clairton have the ability to breathe clean air, and stop paying the price of living in the shadow of a big polluter.”

“This is a significant action taken by ACHD and its continued diligence and enforcement will ensure that citizens across the region can breathe clean air,” Bonomo said.

PennFuture’s Toxic Neighbor Campaign launched in October 2017 with bus transit shelter advertisements in the East End of Pittsburgh, highlighting the harm caused by pollution from U.S. Steel’s Clairton Coke Works, which has committed more than 6,700 air pollution violations over a 3.5-year period. The campaign took citizens to www.toxicneighborpgh.org, where they sent letters to Allegheny County Executive Rich Fitzgerald demanding that he take action to protect clean air for our families and communities. As the campaign progressed, citizens continued to put pressure on the ACHD at public meetings and in the media, working together to ensure that the people of Clairton were heard.

In 2016, PennFuture’s legal team issued a 60-day notice of its intent to sue U.S. Steel for the violations at Clairton Coke Works, at which time ACHD intervened and entered into a consent decree with the company.

The assessment that U.S. Steel is now required to submit to ACHD must include details of all the current emissions at the Clairton Coke Works, and a proposal on how the plant will reduce future SO2 (sulfur dioxides), PM 2.5 (particulate matter) and visible emissions. Reductions of visible emissions shall be quantified by an increase in the rate of compliance with both inspection and continuous opacity monitors.

According to ACHD, implementation of any proposed measures must begin within 30 days of the Health Department’s approval.

If compliance rates do not improve over two-consecutive calendar quarters, the two worst-performing batteries at the Clairton facility will be ordered to cease operation until the Health Department has determined that U.S. Steel has complied with terms of the order.

PennFuture is leading the transition to a clean energy economy in Pennsylvania, fighting big polluters with legal muscle, enforcing environmental laws, and supporting a legislative policy that protects public health. PennFuture is engaging and educating citizens about the realities of climate change and giving them the tools needed to influence lawmakers on the issues. Visit www.pennfuture.org for more information.