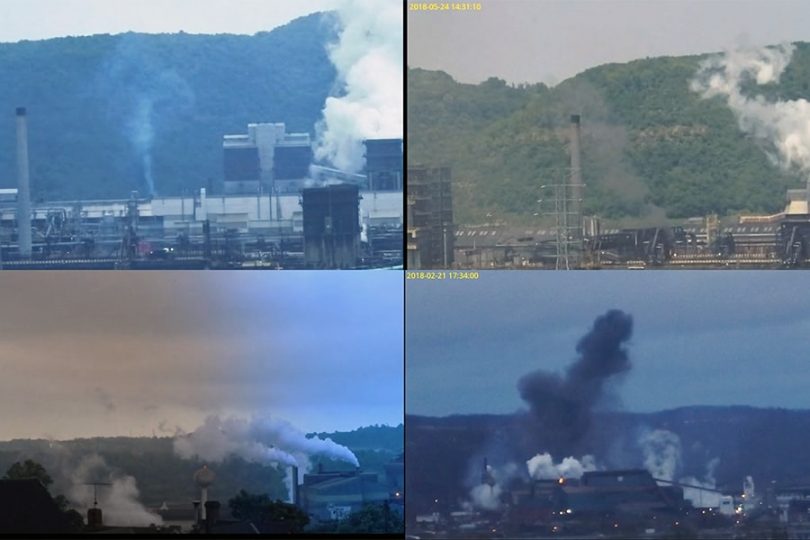 The network is being activated today in conjunction with the United Nations’ World Environment Day.

The high-resolution cameras are trained on three plants in U.S. Steel’s Mon Valley Works: the Clairton Plant coke works, the Edgar Thomson Plant in Braddock, and the Irvin Plant in West Mifflin. Their images will give residents as well as government officials a means of detecting, monitoring and documenting sources of smoke and other visible air pollution.

The Mon Valley Breathe Cams will join the CREATE Lab’s existing Breathe Cam network. Since 2014, the camera system has provided panoramic images to help people in the region visualize what the air over southwestern Pennsylvania looks like on different days and under different atmospheric conditions. The systems were made possible by grants from The Heinz Endowments.

Randy Sargent, who directs Breathe Cam for the CREATE Lab, said the new Mon Valley cameras are being deployed in response to citizen reports to the SmellPGH app. Created by the lab with a grant from The Heinz Endowments, the app helps people share reports of unpleasant or peculiar smells with each other and with the Allegheny County Health Department.

“Many of the smells being reported appear to emanate from the Mon Valley, based on the report locations, prevailing winds and prevalence of pollution-trapping temperature inversions in the river valley,” Sargent said. “We hope to get a better idea about what is happening by observing three of the valley’s largest pollution sources.”

Though all three U.S. Steel plants already are monitored by the health department, cameras make it possible to detect fugitive emissions – air pollution that occurs episodically and doesn’t necessarily escape through a smokestack, Sargent said. Cameras also capture the color of emissions, which provides clues about their chemical content, and show where pollution goes.

The Shenango Channel, an earlier offshoot of the Breathe Cam that monitored the Shenango Inc. coke works on Neville Island, proved the value of 24-hour visual monitoring. Before DTE Energy shuttered the plant in 2016, the Shenango Channel provided evidence of fugitive emissions that resulted in citations for violating county air regulations.

“The beauty of these cameras is they provide visual images of the smells that many have been smelling and reporting on the SmellPGH app,” said Mark Dixon, a local environmental documentarian who has had early access to the Mon Valley cameras. “It’s one thing to say the region suffers from bad pollution on temperature inversion days, and quite another to see what happens when plumes of smoke hit an invisible wall and spread out over the valley.”

As with the existing Breathe Cam network, users can use interactive controls to zoom in on items of interest, whether it is a hovering brown cloud or an individual smokestack. They can scan back in time to look for sources or particular incidents and can skip back to particular dates and times of previous incidents. The tools were designed to be easy to use and learn. A short tutorial helps users and residents to capture footage that identifies and quantifies events, such as releases from smokestacks.

The additional cameras, which also capture images more frequently and in higher resolution, have increased the volume of imagery processed by Breathe Cam network by a factor of 10, necessitating some technical upgrades of the system.

“My hope is that the cameras will make someone accountable when things go wrong,” said Mary Carey, a 25-year resident of Braddock. “There should be consequences to pay when polluters don’t do what they should be doing to protect people’s health.”

“I’ve lived in Clairton all my life and have seen many of my classmates suffer from asthma,” said Jaden McDougald, a graduating senior at Clairton High School. “I’m excited that there will be a tool that people in my community can use to learn more about what is contributing to our poor air quality and how we can fix it. It’s about time Clairton got some fresh clean air.”