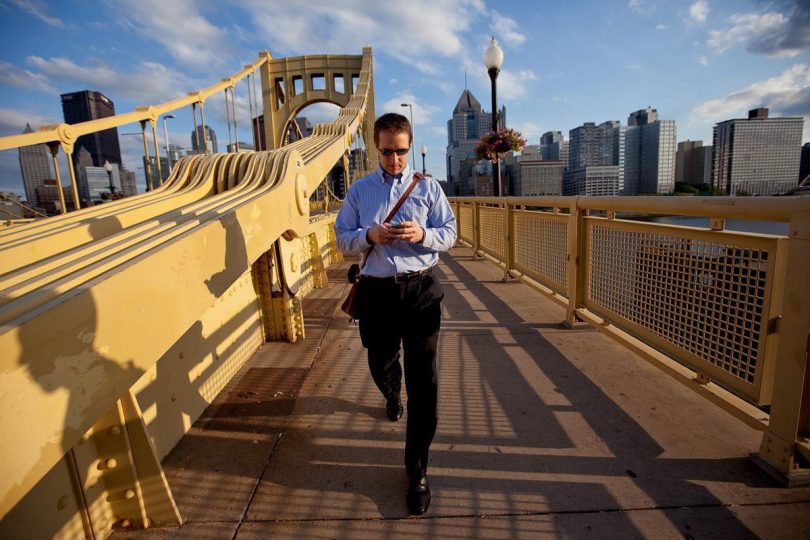 A downtown employee texts as he walks home across the Roberto Clemente Bridge after working downtown.

Over the past two centuries, Pittsburgh has had various stages of urban development, including a complete redevelopment of Downtown. More recently, there has been a push for “complete streets,” which are accessible to everyone including pedestrians, bicycles, and varying personal mobilities. Meet a few of the instigators pushing Pittsburgh’s street accessibility for all:. 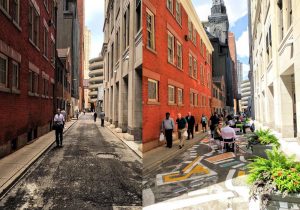 Before and after of Strawberry Way, courtesy of Envision Downtown

Envision Downtown’s view for Downtown is to make the neighborhood more accessible to pedestrians by revitalizing the various alleyways. Strawberry Way is a demonstration of the future of public space priority in Pittsburgh.

The group did a survey of the street to show that while 700 people per hour were walking through the alley, only 3 cars passed through. Envision Downtown decided to redesign the alley to better serve its main users–the pedestrians.

Adding a colorful mural on the street to make it more inviting and an invigorating experience, Envision Downtown also worked with the City to add twelve table sets to create a space where people were not only passing through–but staying and enjoying.

Their efforts worked because pedestrian traffic increased 43% after the installation, and stationary activity increased 462% for people using the tables. According to Envision Downtown, Strawberry way, like all Envision Downtown projects, is an opportunity for iterative design and public engagement. Simultaneously, Strawberry Way is designed to inspire action in underutilized urban spaces throughout the City of Pittsburgh. 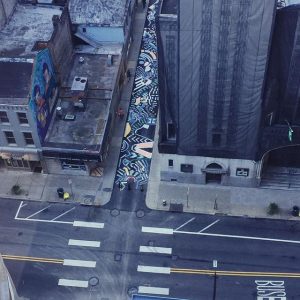 An aerial view of Strawberry Way, courtesy of the Pittsburgh Downtown Partnership

And in an example of the City of Pittsburgh partnering with local groups to make streets safer, Councilman Dan Gilman advocated legislation protecting pedestrians. The legislation amends the Pittsburgh City Code to require safer conditions for pedestrians in the event that construction closes a city sidewalk. The legislation will ensure that protective barriers are put in place so that no one is harmed by construction and at night warning devices will be put on any barriers or construction equipment. To make it easier on pedestrians, if any construction goes over thirty days, a covered walkway will be put over the sidewalk to open the sidewalk again and still offer protection.

This is in an effort to continue to promote healthy activities and alternative methods of transportation in the city while maintaining safety.

One of the components of Complete Streets is to have streets and sidewalks that are attractive, designed, and enjoyable to walk on. The Bloomfield Garfield Corp’s Green+Screens program is sustainability beautifying Pittsburgh’s Penn Avenue–a main thoroughfare from East Liberty through Pittsburgh’s Downtown. 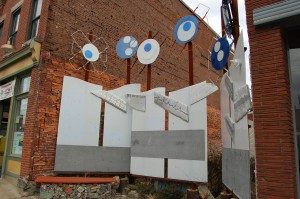 The beautification of a lot along Penn Avenue, courtesy of the Bloomfield Garfield Corporation

Green+Screen creates architectural screens and landscaping to beautify the community. The screens use green materials that shield empty lots or parking lots from view of the street. The screens “continue or echo the façade of neighboring buildings or use median strips between sidewalk and paved lots.”

In the first three years, they have installed six projects along Penn Avenue. These designed elements make walking the streets more desirable and enjoyable for pedestrians–making them feel welcomed in the community.

Additionally, the Bloomfield Garfield Corporation is working with the City of Pittsburgh to reinvest in the sidewalk infrastructure and install new lights along Penn Avenue. Fixing the sidewalks, coupled with beautifying the walk down the street, is helping to ‘complete’ the streets between East Liberty and Downtown Pittsburgh.