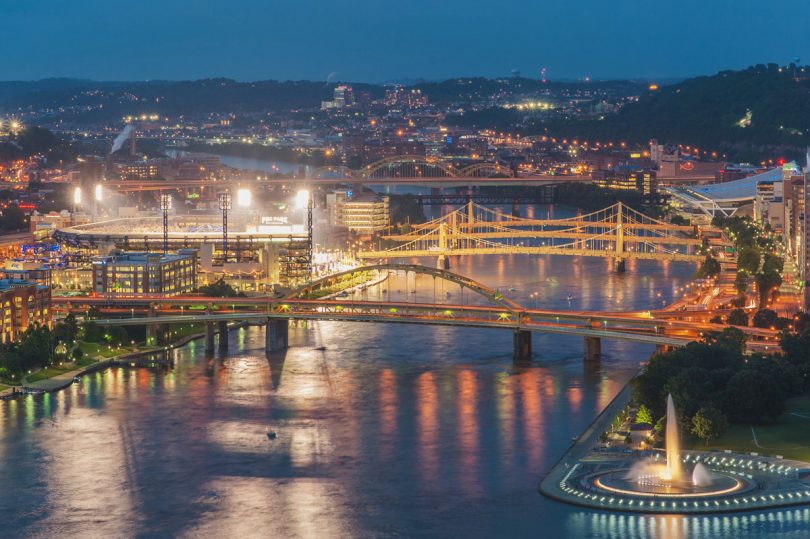 Environmental issues impact everyone in Pittsburgh, but often city residents don’t have access to information about the issues that are most relevant to their communities. Envision Downtown, The University of Pittsburgh, and Communitopia are taking matters into their own hands with creative solutions that bring information to the masses.

According to the Clean Rivers Campaign, Pittsburgh’s sewer systems are creating huge problems for our community. Many of our sewers carry both storm water runoff and sewage, and with just small amounts of rain, our sewer system becomes overwhelmed and untreated wastewater flows directly into our rivers. Our rivers become so fouled with waste from these sewer overflows that it’s unsafe to even touch the water for roughly half of each year’s boating season. Sewers are also backing up in basements, and flooding in many areas is not an uncommon occurrence.

Envision Downtown created the Mobile Parklet to raise awareness about storm water management issues in Pittsburgh. The mobile parklet, which replaces 1 1/2 parking spaces with soil and tress, shows city residents how they can have an impact on the city’s storm water problems. The parklet helps to remove storm water run off that overwhelms the Pittsburgh sewer system especially after heavy rain. The water instead is used by the trees and plants and additional excess is slowly released after filtering through top soil and gravel.

The University of Pittsburgh student population dominates much of the neighborhood of Oakland. But with the high turnover of student-rented apartments and houses, coupled with the fluctuating city weather, Oakland was littered with usable items at the end of every semester. Students did not have an outlet for their perfectly fine, but unwanted items, and often just threw them away or left them on street corners.

A group of Pitt students banded together to create Thriftsburgh, an on-campus thrift store that rescues students’ clothing waste. According to Maura Kay, junior at Pitt and director of the store, Thriftsburgh “is a model of sustainability on campus but also educates the Pitt community on the personal sustainable practices they can adopt in their own lives.”

Thriftsburgh has a wide student reach because a variety of students volunteer. From environmentally-driven students, to marketing majors helping promote the store on social media, everyone on campus has heard about Thriftsburgh. And with each new class of students, a new generation of Pitt students go through the University believing that responsible donating and recycling of clothes is just the norm.

Don’t Just Sit There–Do Something! is a funny web series by Communitopia. Using humor as a starting point, the web series aims to help city residents realize their own roles in climate change and how they can help.

Climate Change is often spoken about but not often understood, and Don’t Just Sit There tackles a range of issues from energy bills, to water, to agriculture. Communitopia Director Joylette Portlock stars in each video and uses humor to make these issues more accessible and break down climate change into easier-to-understand pieces.

These videos are helping Pittsburghers get more on board with preventing climate change.

Find all of Communitopia’s videos here, and view the most recent one here: